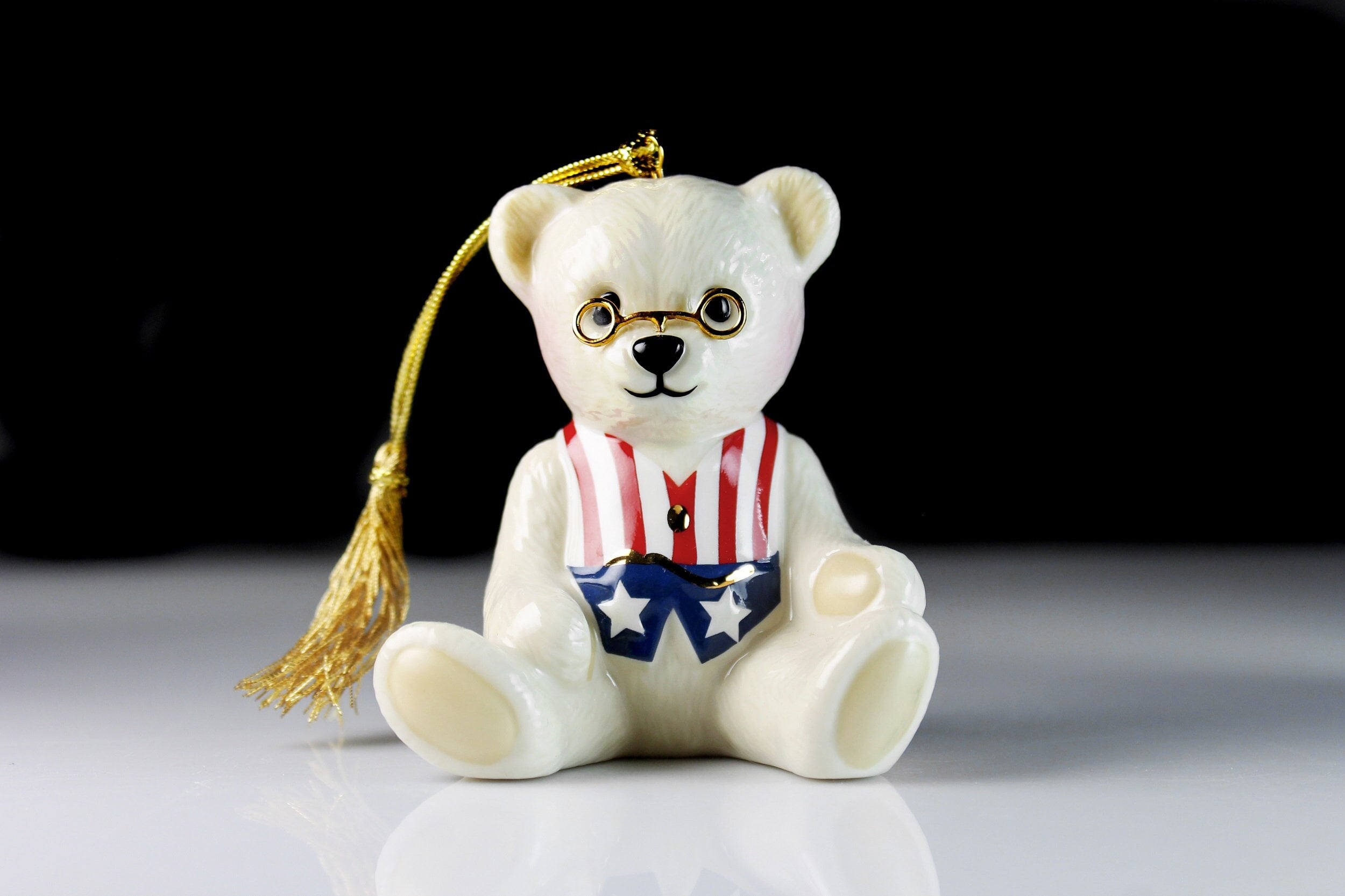 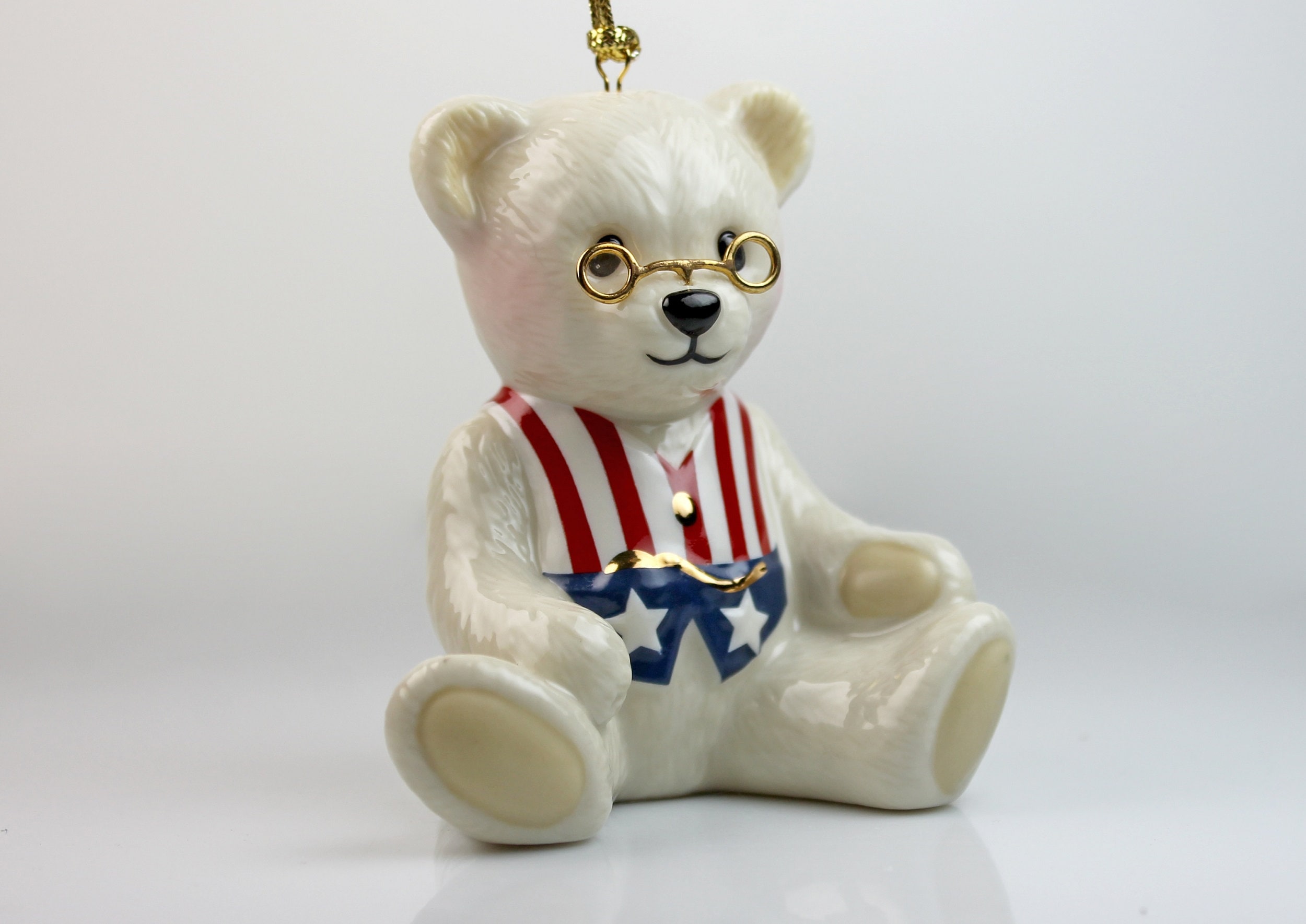 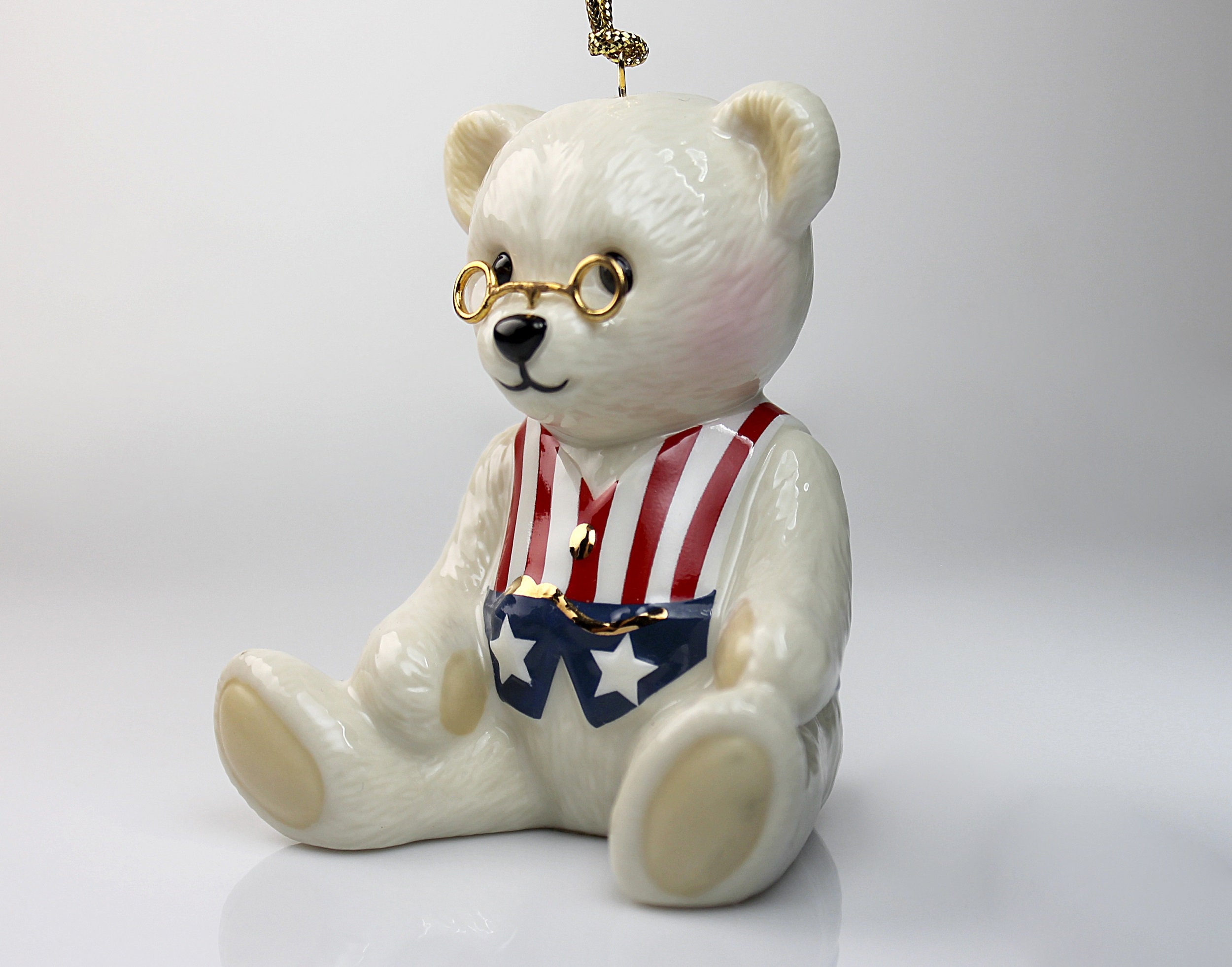 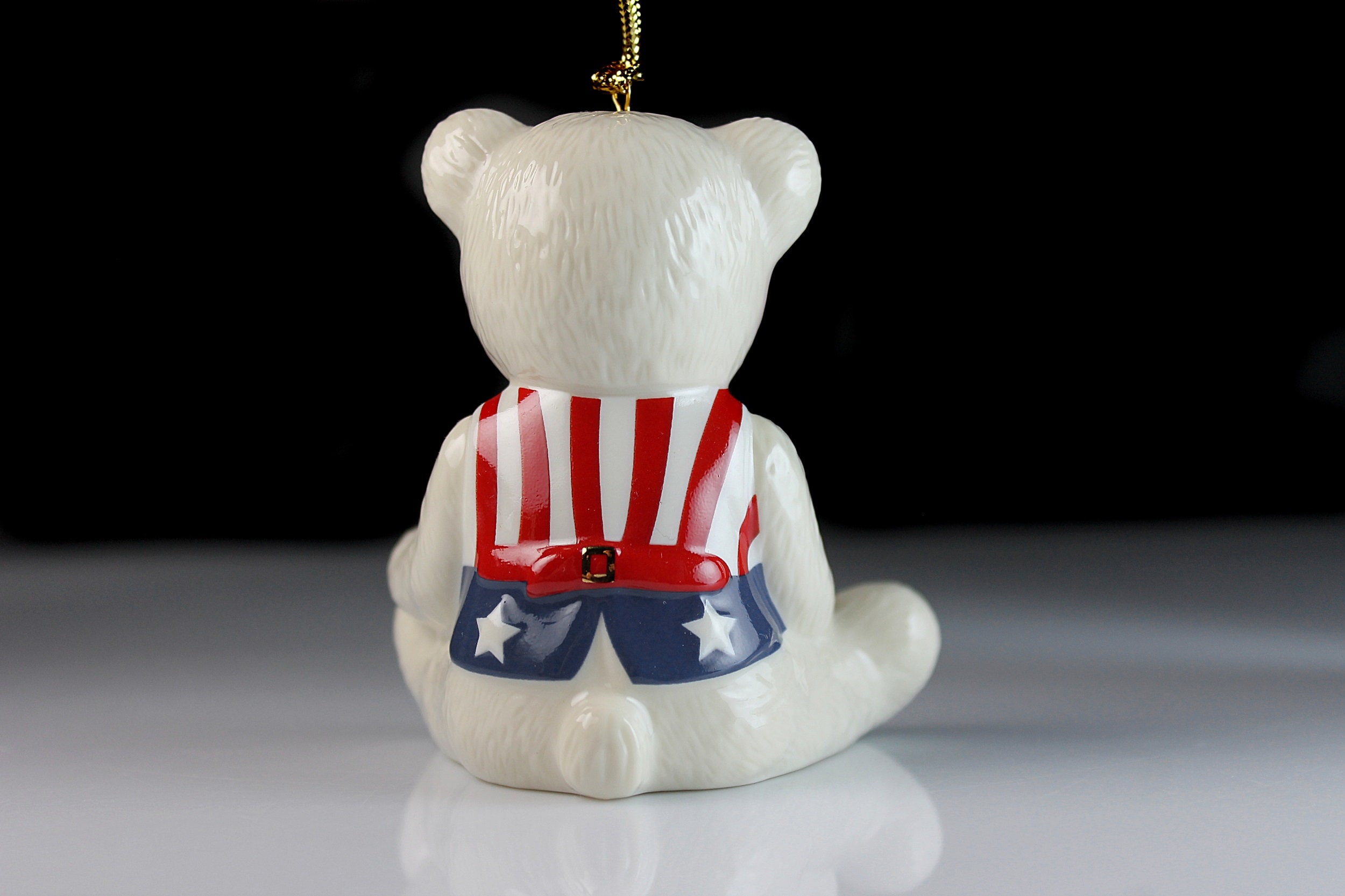 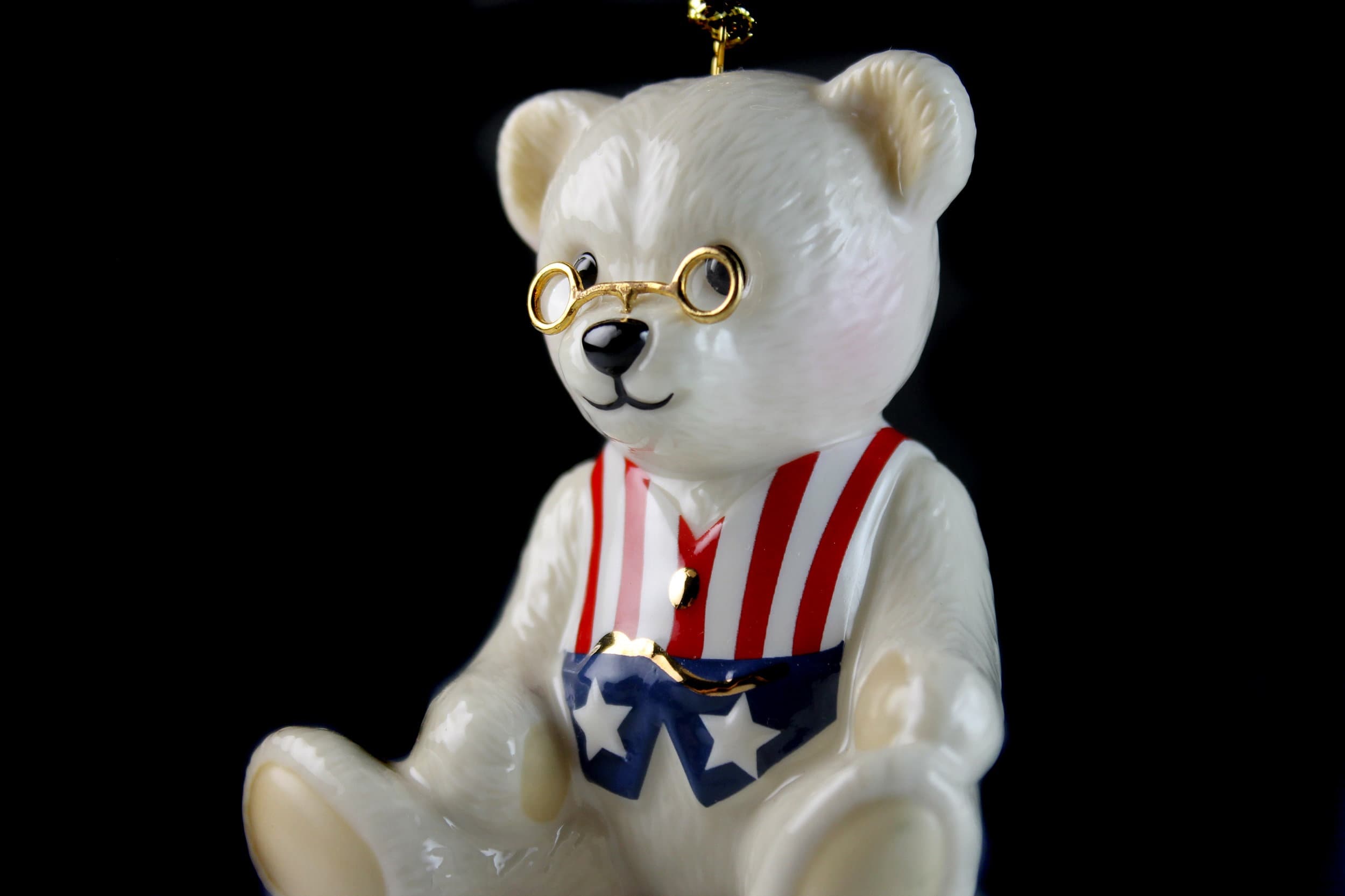 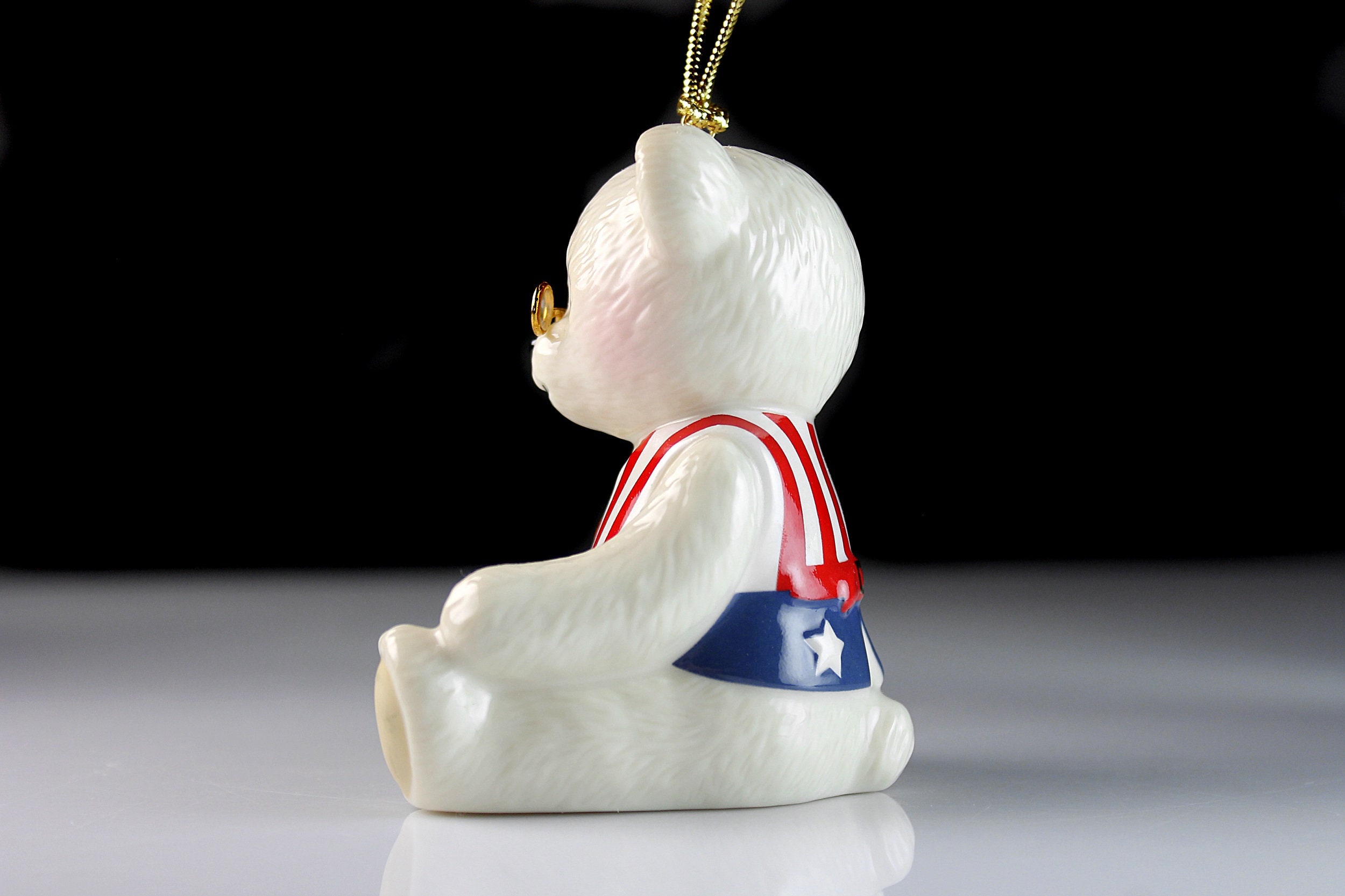 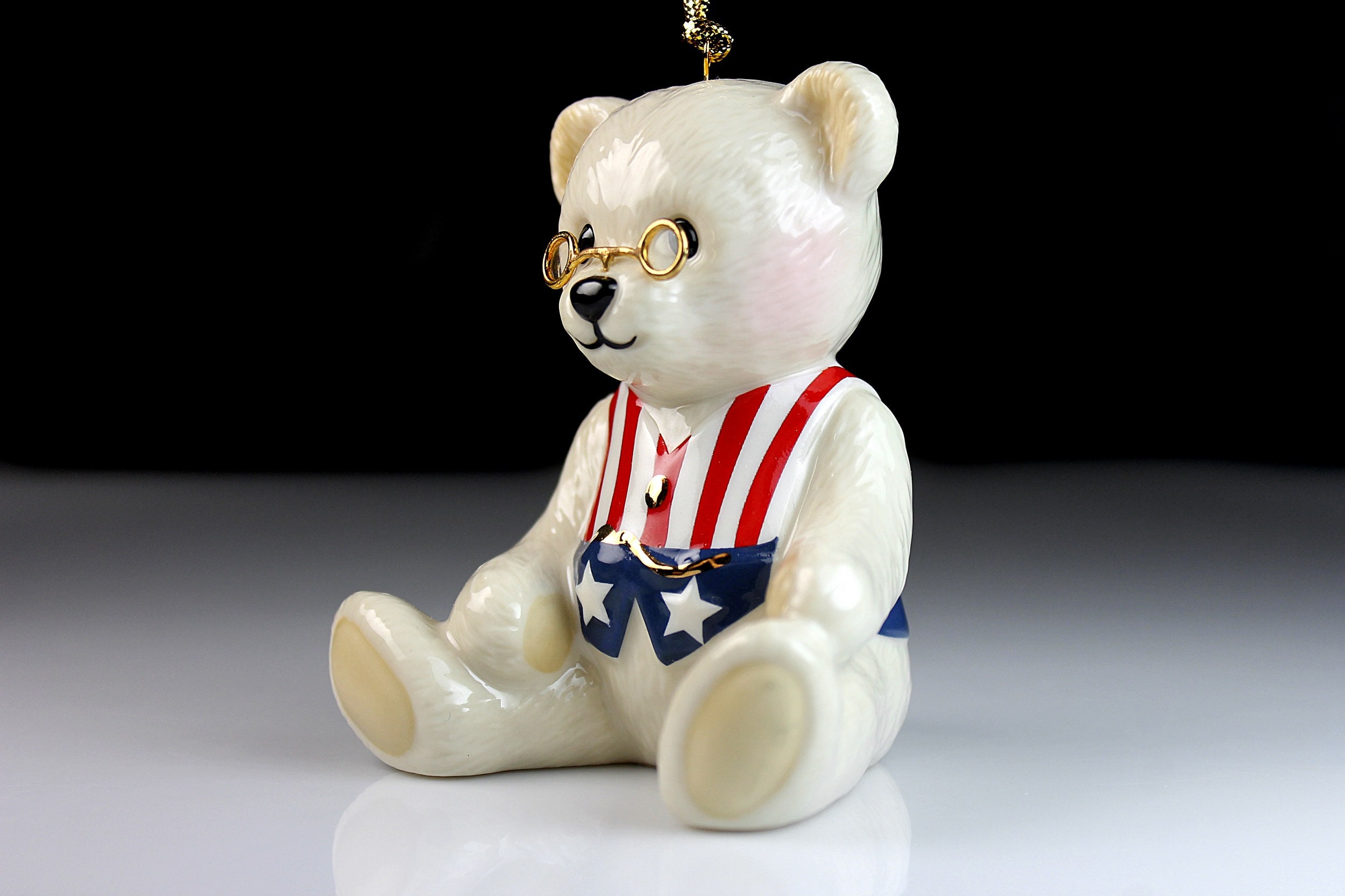 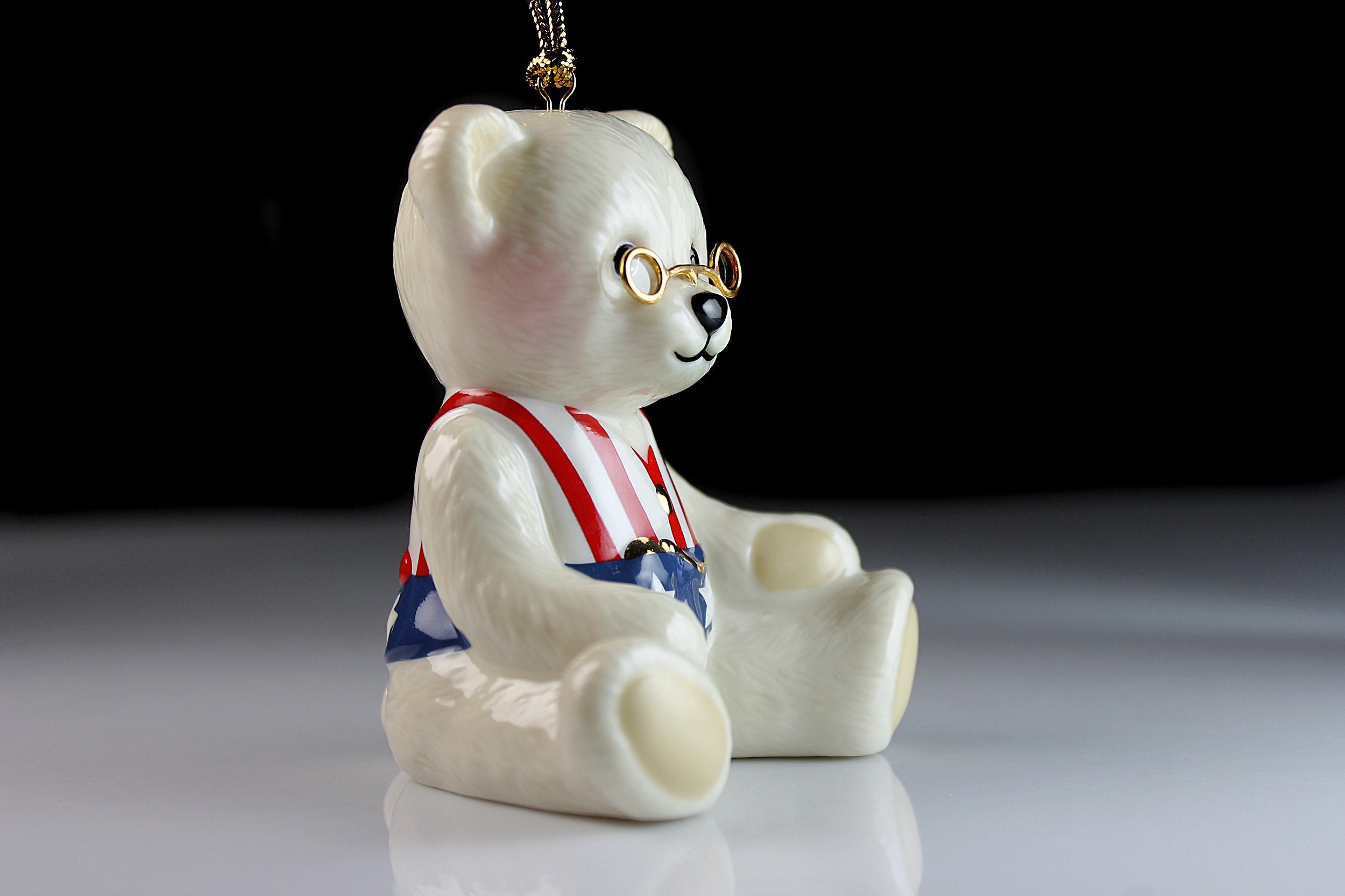 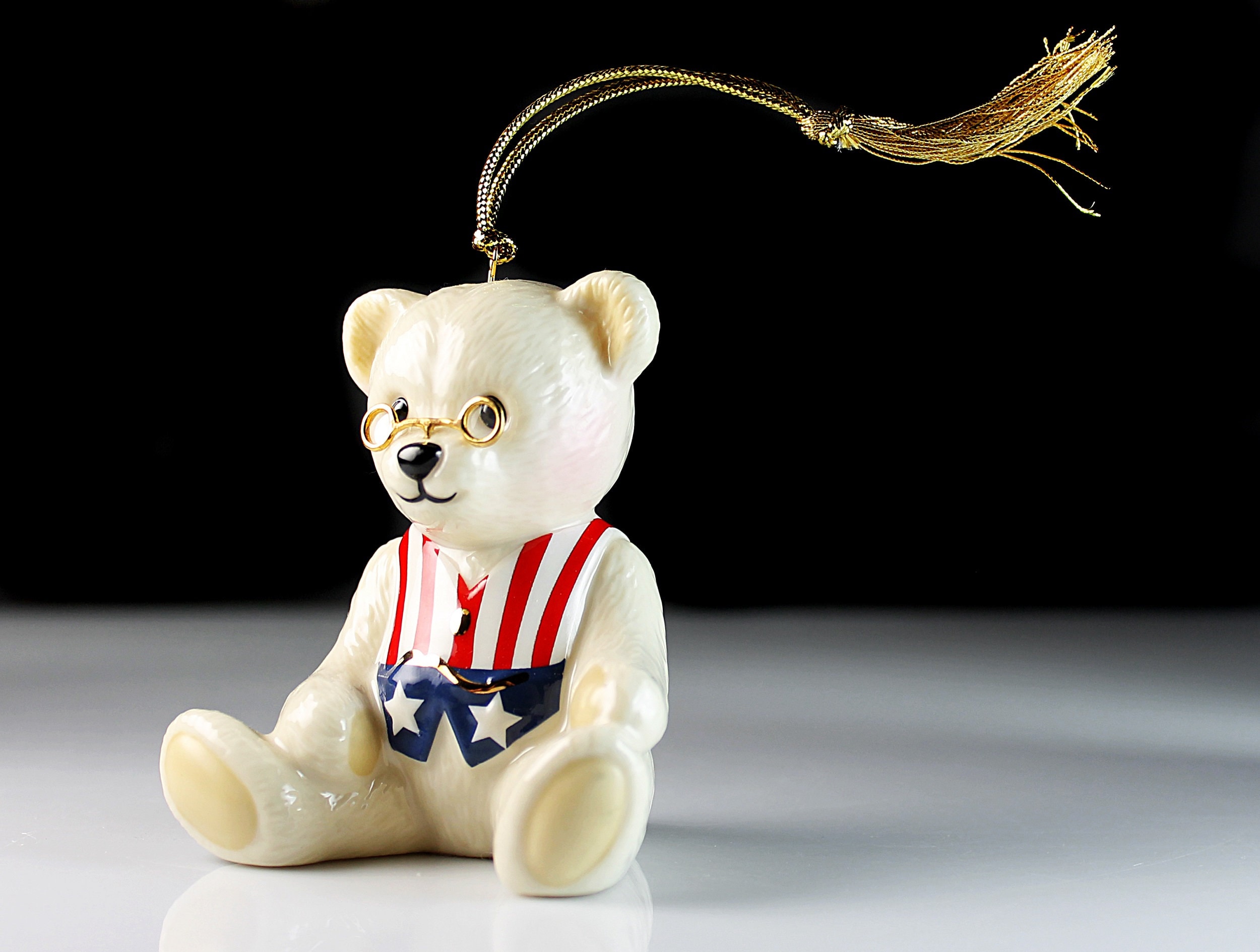 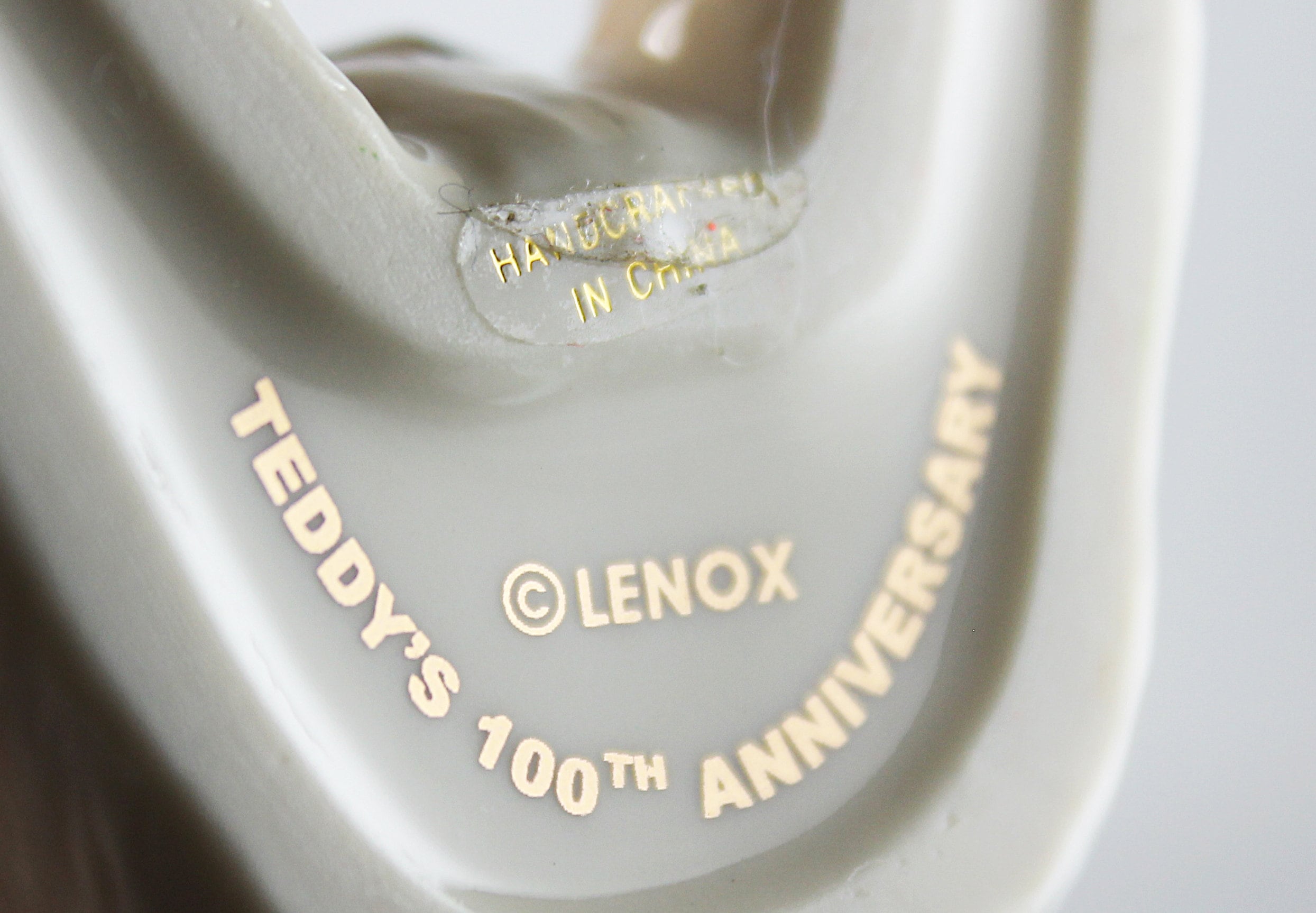 A gorgeous Teddy Bear Christmas ornament by Lenox. This is called Teddy's 100th Anniversary and consists of a teddy bear with Pince Nez glasses, a vest in red and whites stripes with white stars on a blue background, and a gold pocket watch and button. This is in the famous Lenox cream color and trimmed in 24K gold. A perfect addition to your Christmas tree. This would be an elegant gift idea for newlyweds, family, or friends.

This is the reason for the 100 anniversary ornament:
Did you know that the Teddy Bear was invented in honor of President Theodore Roosevelt? It all began when Theodore Roosevelt was on a bear hunting trip near Onward, Mississippi on November 14, 1902. Mississippi's Governor Andrew H. Longino had invited him, but unlike other hunters in the group, Theodore had not located a single bear. Roosevelt's assistants, led by Holt Collier, a born slave and former Confederate cavalryman, cornered and tied a black bear to a willow tree. They summoned Roosevelt and suggested that he shoot it. Viewing this as extremely unsportsmanlike, Roosevelt refused to shoot the bear. The news of this event spread quickly through newspaper articles across the country. The articles recounted the story of the president who refused to shoot a bear. However, it was not just any president, it was Theodore Roosevelt the big game hunter! Clifford Berryman, a political cartoonist, read the article and decided to lightheartedly satirize the president's refusal to shoot the bear. Berryman's cartoon appeared in the Washington Post on November 16, 1902. Morris Michtom, a Brooklyn candy shop owner, saw the cartoon and had an idea. He and his wife Rose also made stuffed animals, and Michtom decided to create a stuffed toy bear and dedicate it to the president who refused to shoot a bear. He called it 'Teddy's Bear'. After receiving Roosevelt's permission to use his name, Michtom mass produced the toy bears which were so popular that he soon founded the Ideal Toy Company. To this day the Teddy Bear has worldwide popularity and its origin can be traced back to Theodore's fateful hunting trip in 1902. Now, to commemorate the 100th anniversary of the Teddy Bear, Lenox presented a quality plush Teddy Bear cradling a china bear holiday ornament (the one for sale here). In the classic Lenox tradition, the ornament in made of fine ivory china, hand-painted and accented with 24 karat gold. This is why the ornament is dressed like Theodore Roosevelt with Pince Nez glasses.

This ornament is in 'like new' condition. It has no chips, cracks, or crazing.

Great for giving as a gift for the holiday!!

©For People With A Deep Love Of Things Vintage