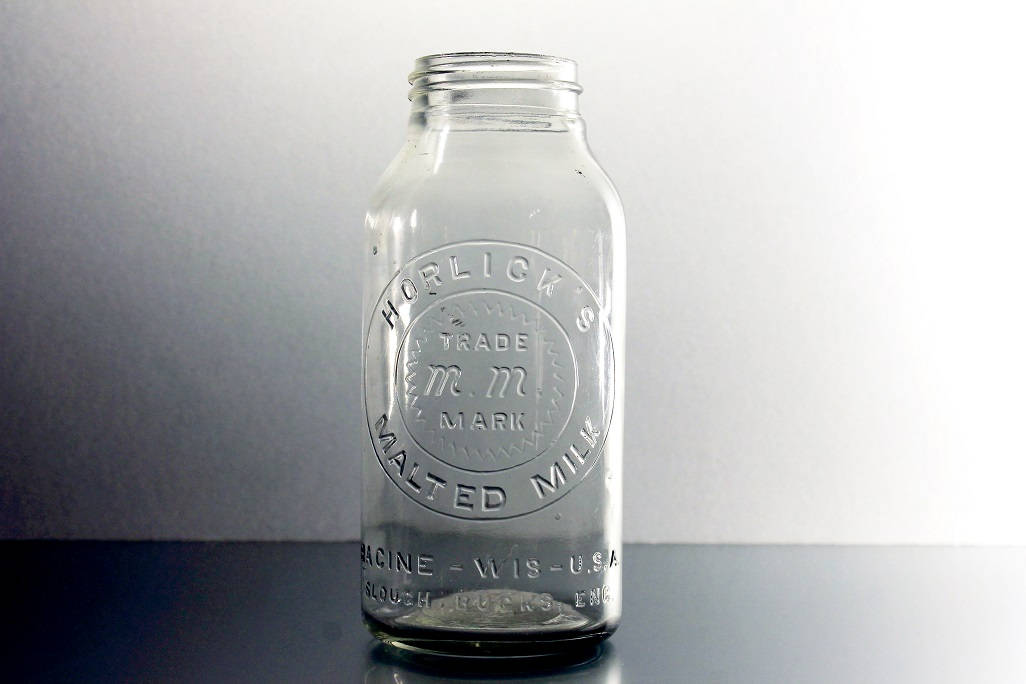 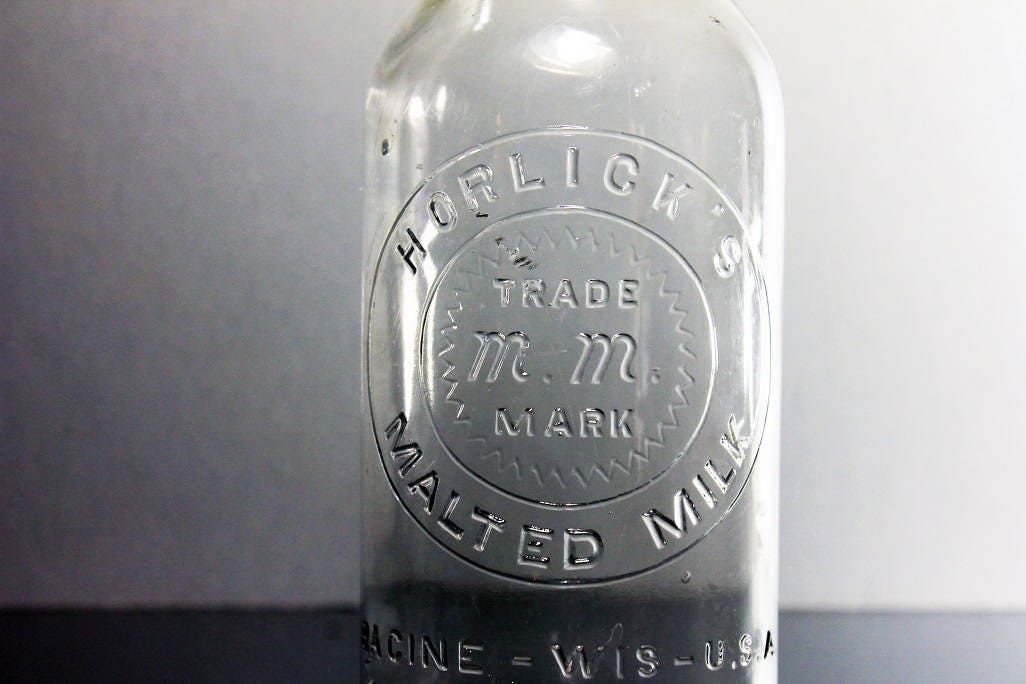 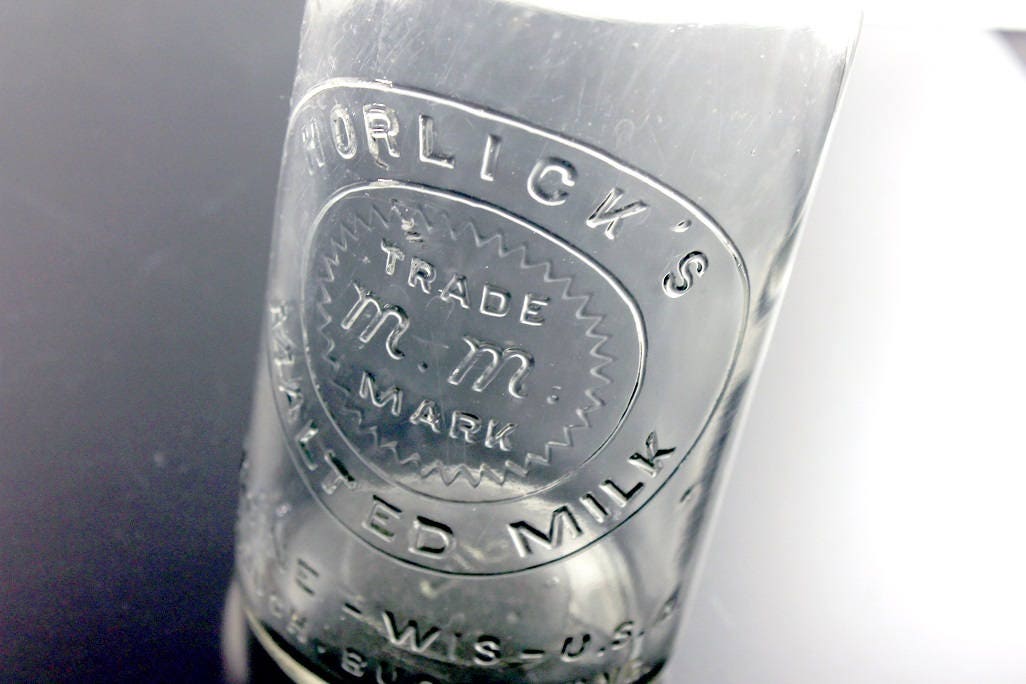 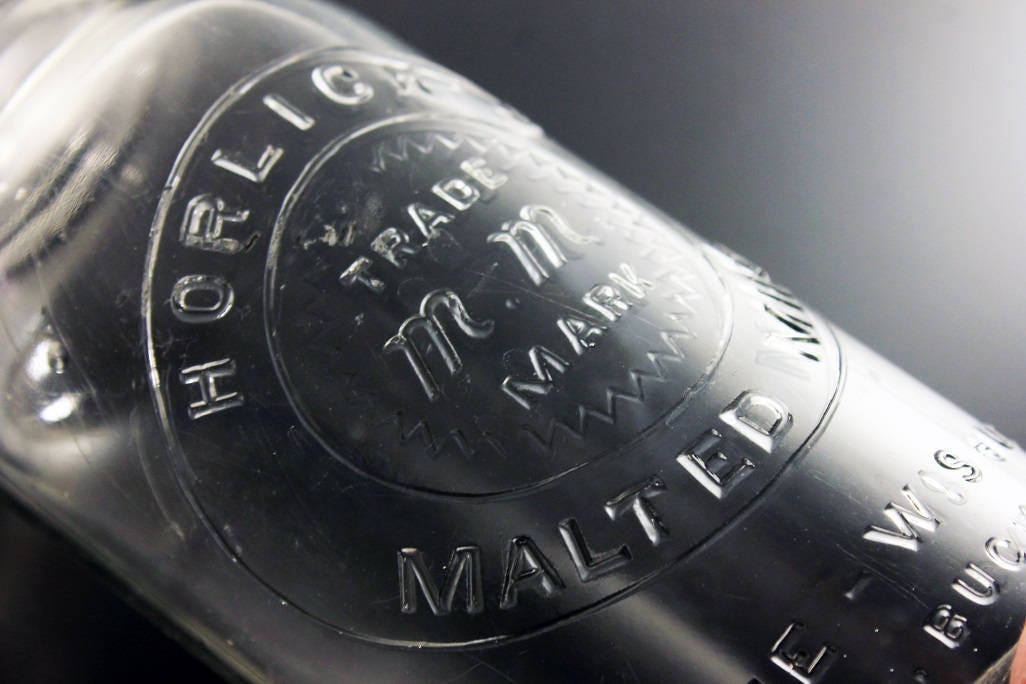 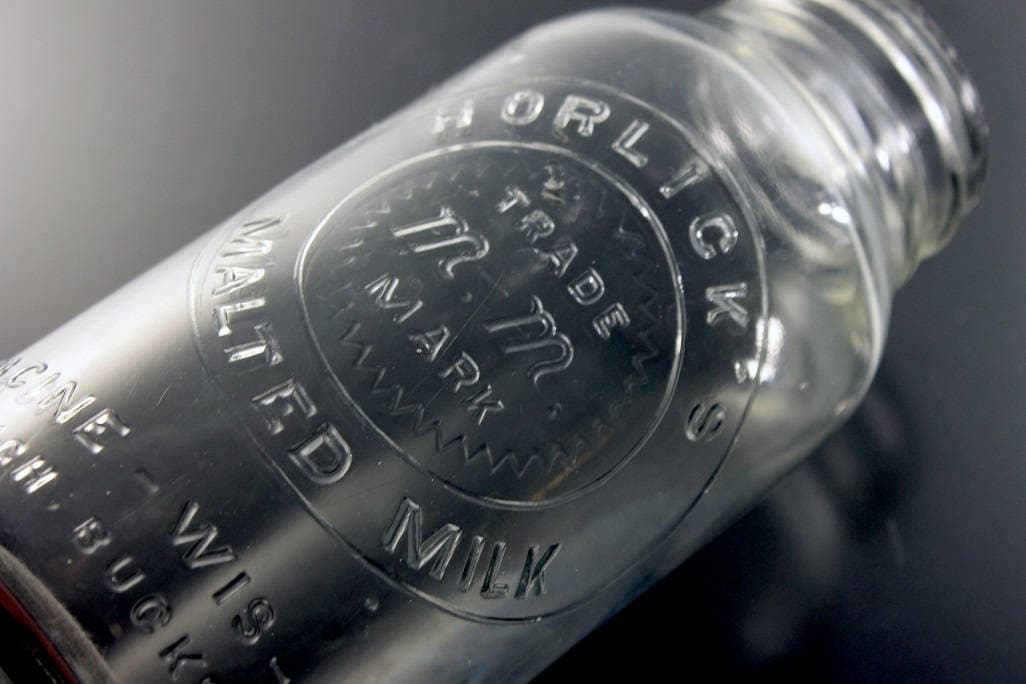 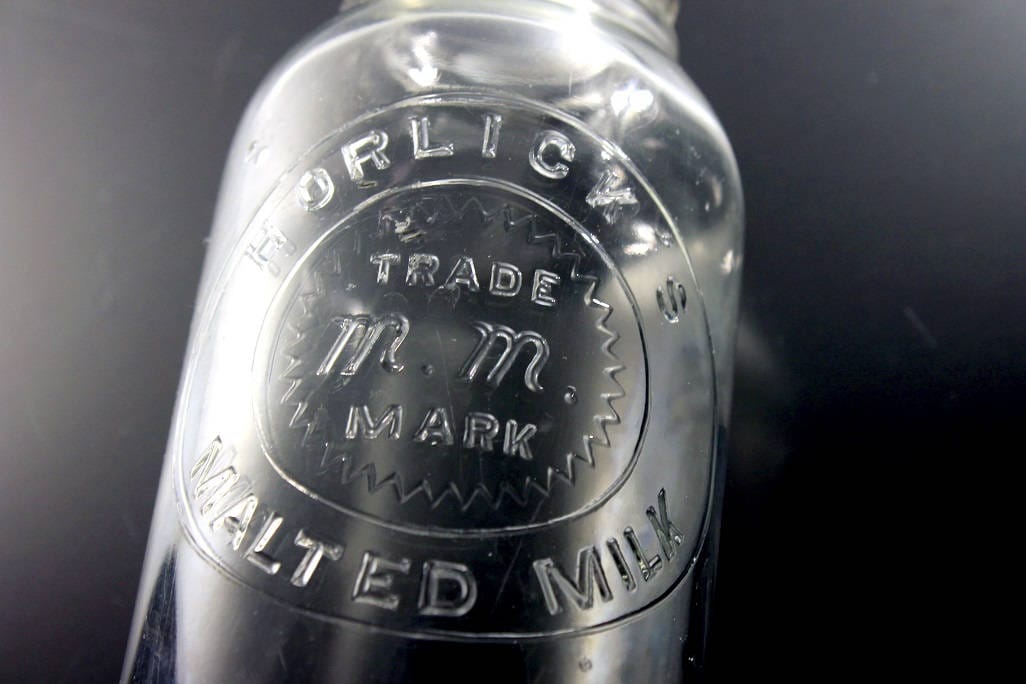 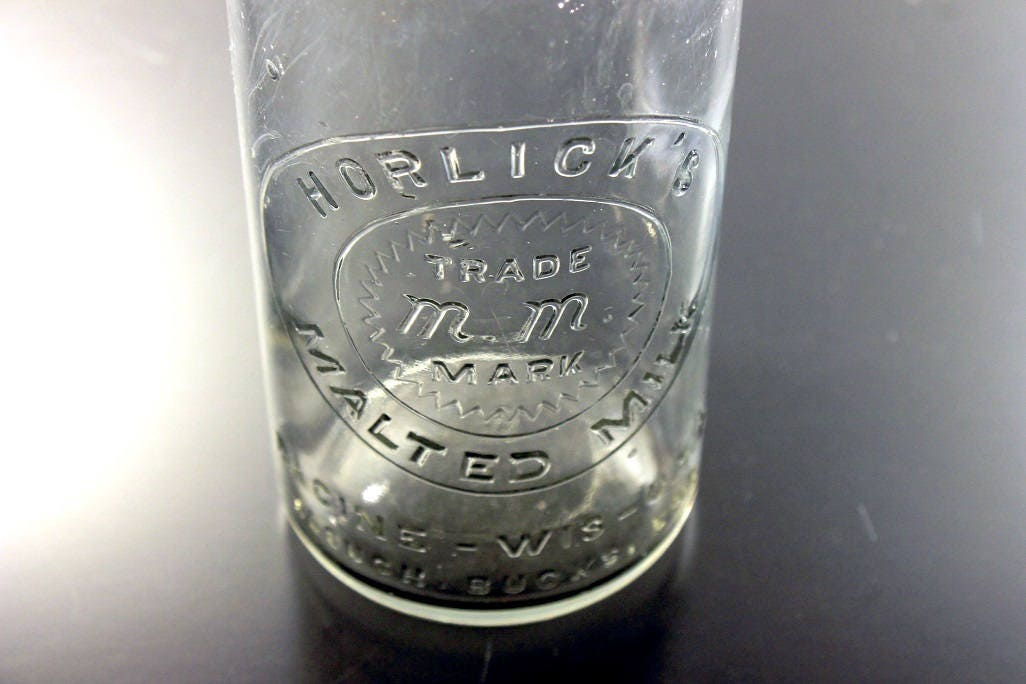 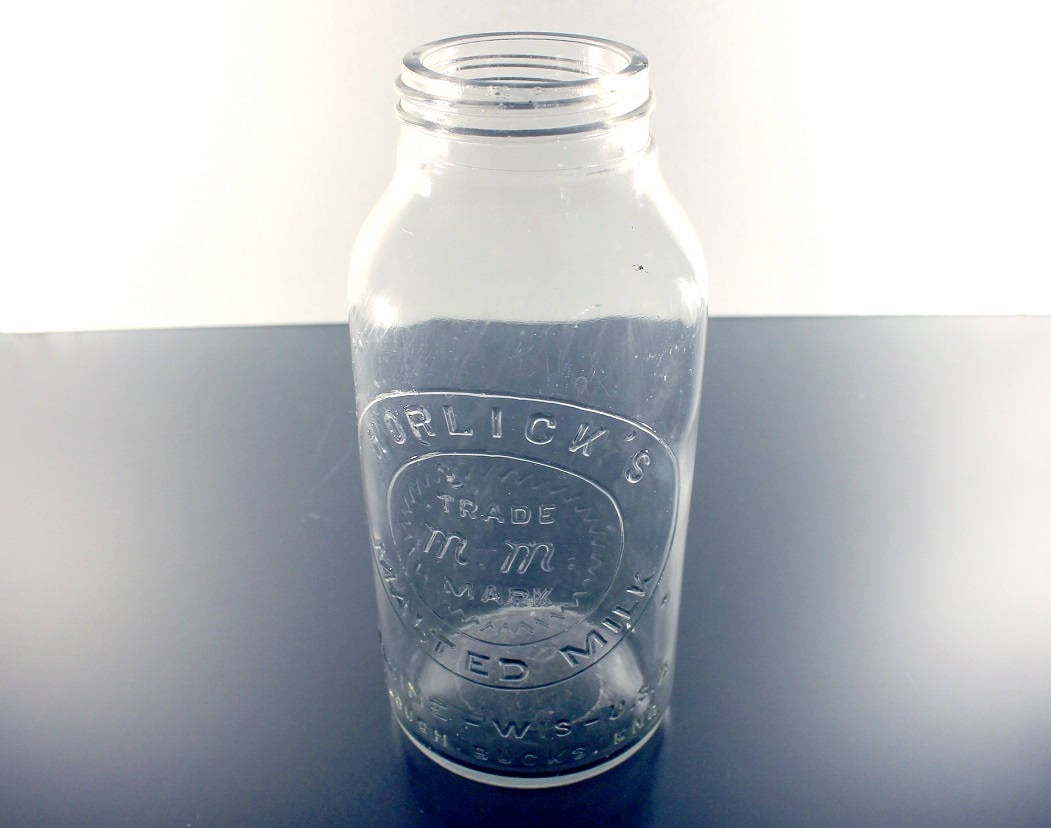 A wonderful clear glass bottle with a screw top. The embossing on the bottle states: "Horlicks Malted Milk-- Trade M.M. Mark-- Racine - Wis - USA -- Slouch, Bucks, Eng". The bottle is from circa 1920s.

Brothers James and William Horlick of England founded a company that carried the name of Racine, Wisconsin, to the farthest reaches of the globe and changed the way America ate. London pharmacist James Horlick developed ideas for an improved, wheat and malt-based nutritional supplement for infants. Despairing of his opportunities in England, James joined his brother William, who had come to Racine to work at a relative's quarry. In 1873 James and William formed a company to manufacture their own brand of infant food. Ten years later, they earned a patent for a new formula enhanced with dried milk. The company trademarked the name "malted milk" in 1887.

Despite its origins as a health food for infants and invalids, malted milk found several unexpected markets. Explorers appreciated its lightweight, non-perishable, high-calorie qualities and began taking malted milk on treks worldwide. In fact, William Horlick became a patron of Antarctic exploration, and in return, Admiral Richard E. Byrd named a mountain range in Antarctica after the Racine manufacturer.

Back at home, healthy people began drinking Horlick's product simply for the taste. Malted milk became a standard offering of soda fountains across the country and found even greater popularity when mixed with ice cream into a "malted." The fondly remembered malt shops of communities large and small owe their very name to the Horlick brothers of Racine.


*** Above description will be included with bottle on tan cardstock***

This bottle is in excellent condition. There are no chips or cracks. There are bubbles in the glass from the manufacturing process.