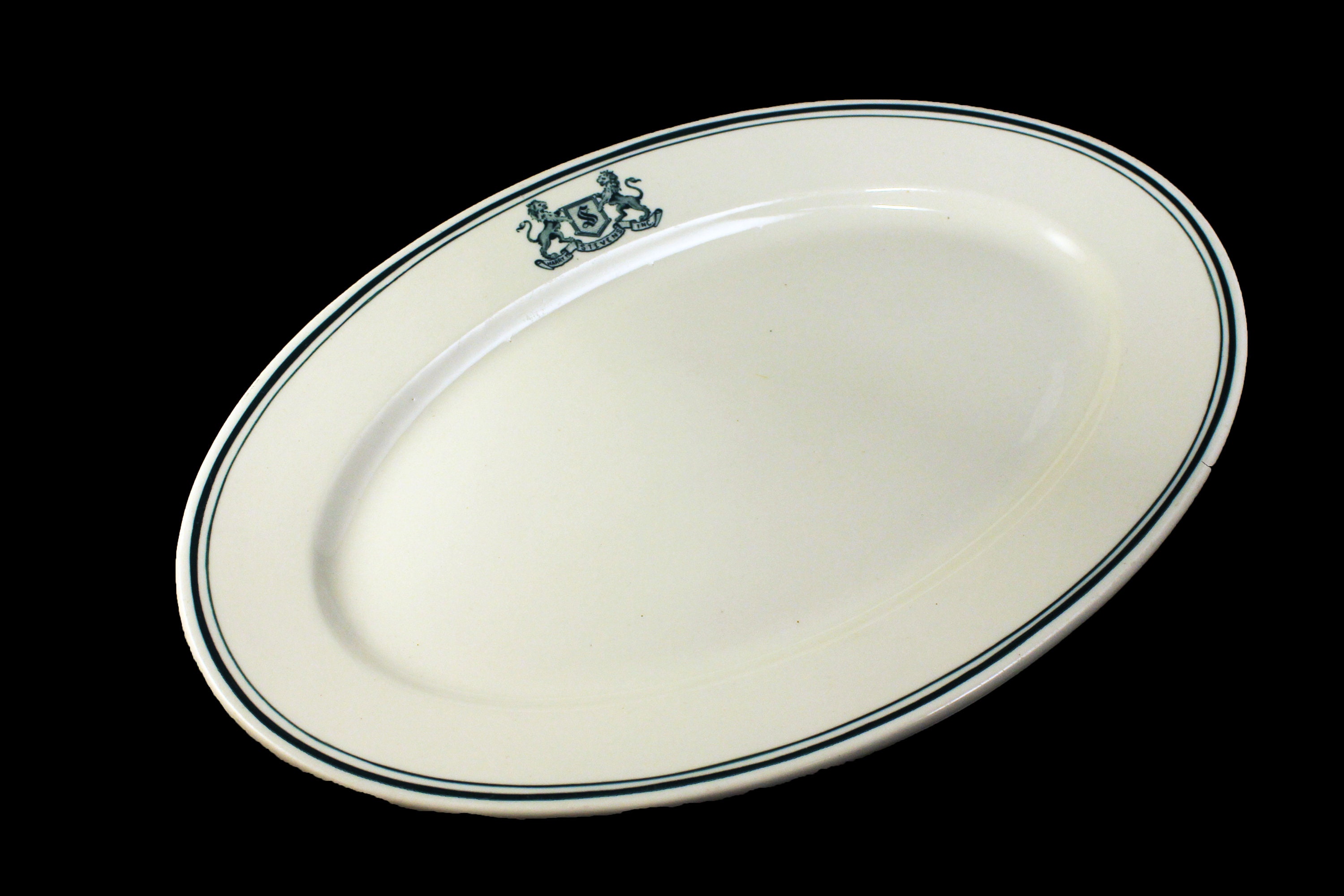 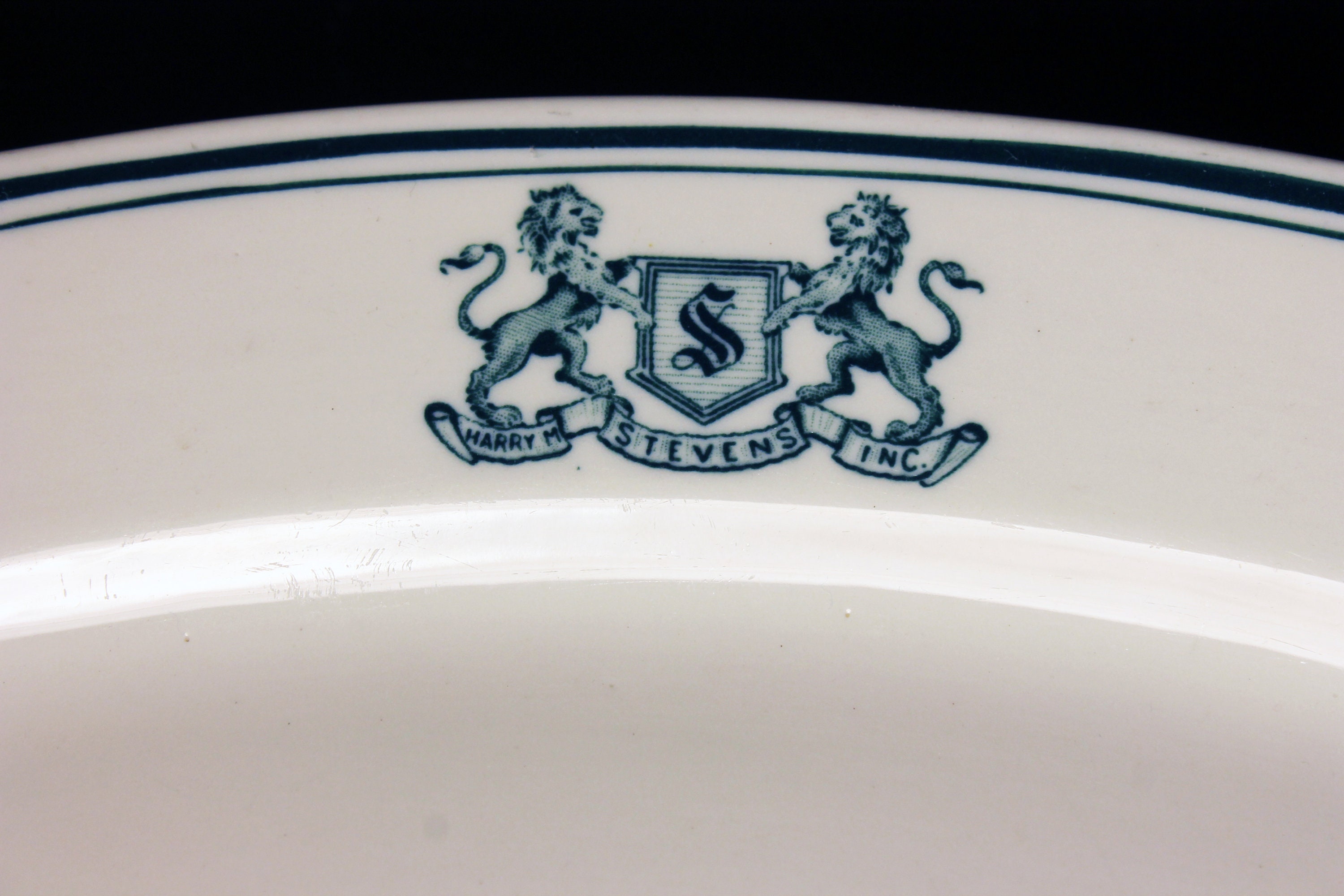 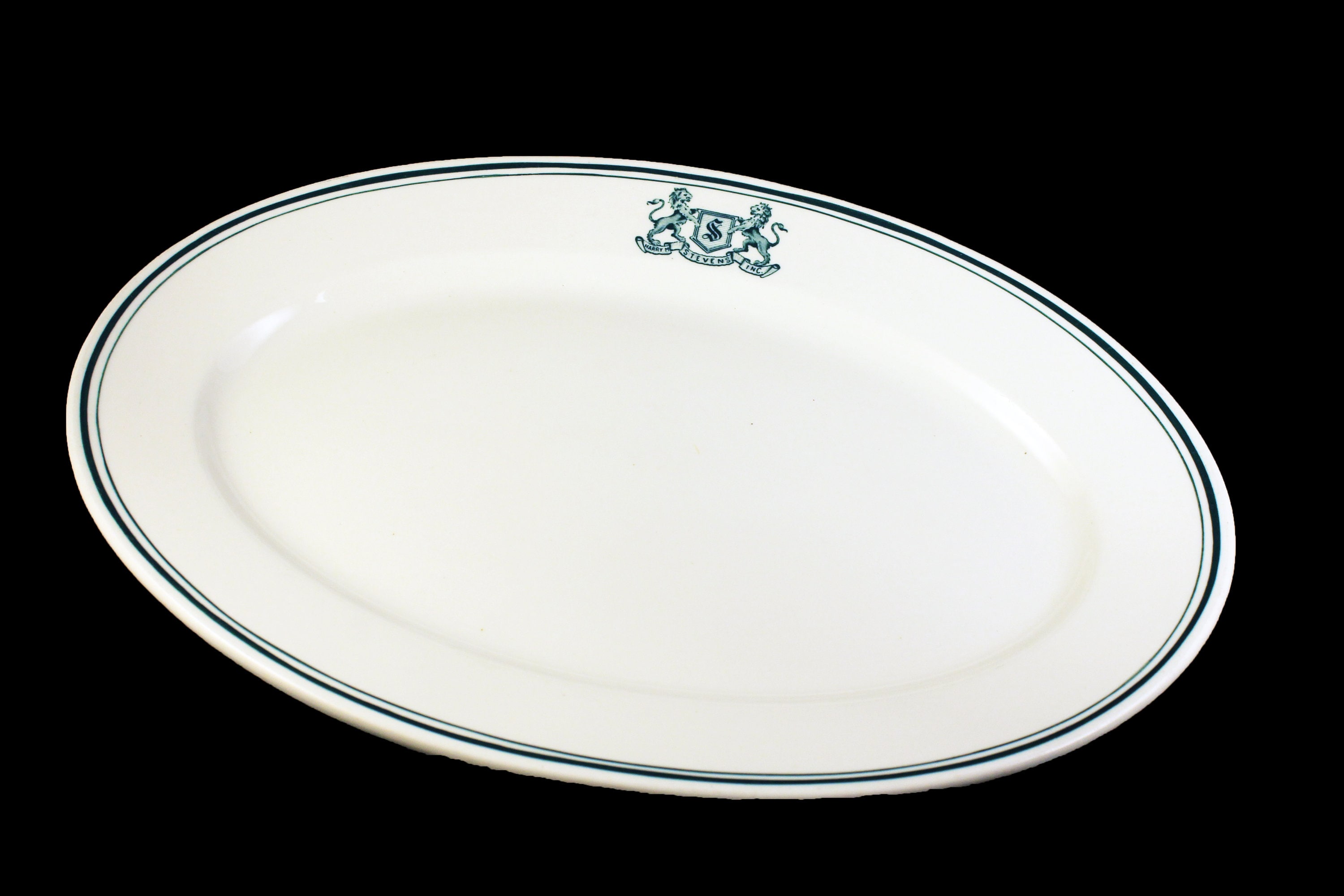 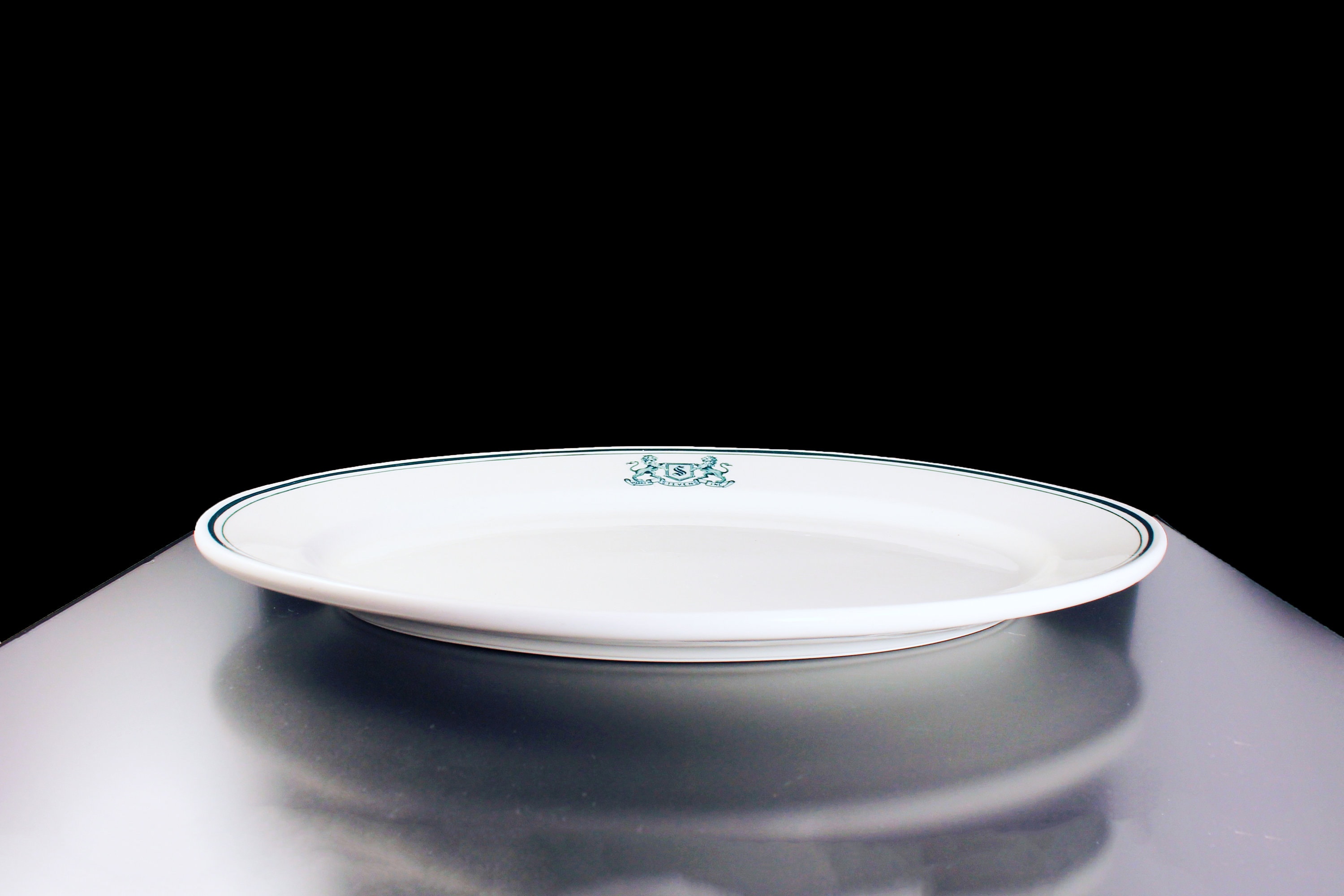 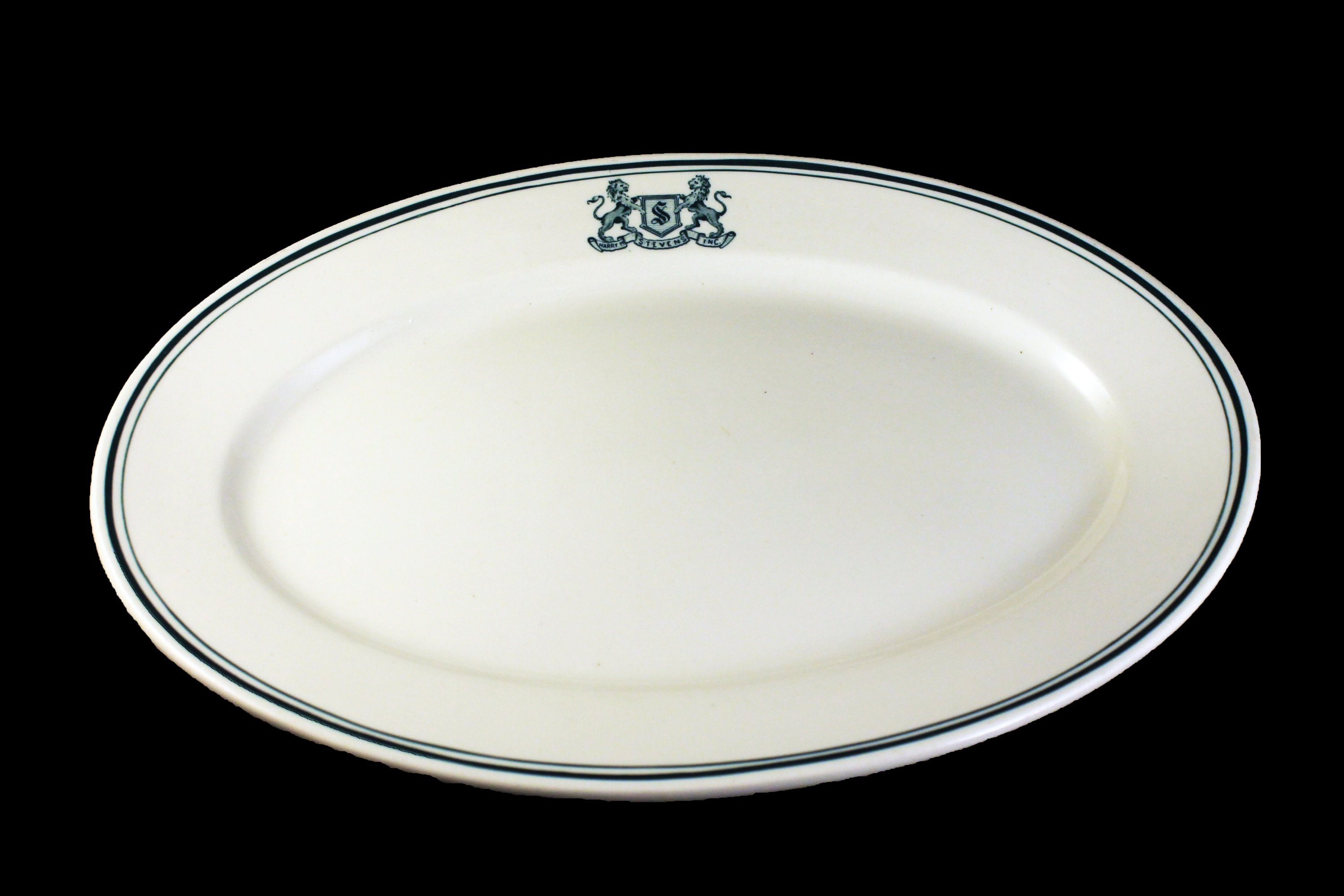 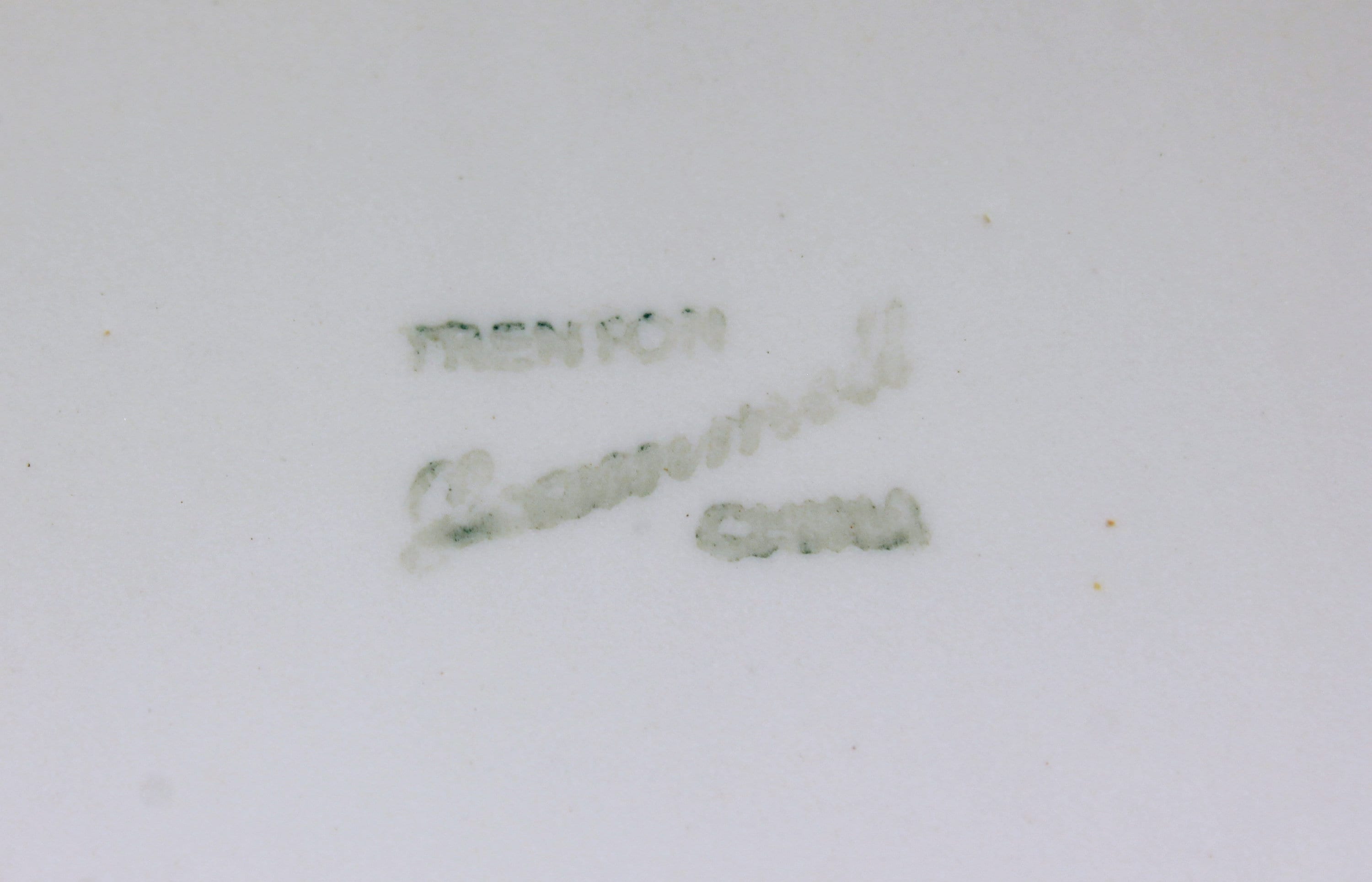 A wonderful platter made for the baseball concessionaire Harry W. Stevens, Inc. The pattern consists of a blue coat of arms which consists of a shield with the leather 'S' in the center with a pair of lions on each side. The lions stand on a ribbon with Harry W. Stevens Inc on them. This is a very heavy restaurant grade china. It would look wonderful on a sideboard, buffet, or dinner table. What a great gift idea for a baseball fan.

Harry M. Stevens (1856–1934) has gone down in history as the most important concessionaire in American baseball.
In 1887, he founded a stadium concessions company in Cranbury, New Jersey, named Harry M Stevens Inc. A pioneer selling food and baseball-related items to patrons who attended ball games, his company endured for 107 years until it was acquired by Aramark in December 1994. By 1900, Stevens had landed contracts to supply refreshments at several Major League ballparks across the United States. He also is given credit for inventing the hot dog. Stevens is credited with telling the story that at the home opener of the New York Giants on a cold April day in 1901, there was limited demand for ice cream. Always creative, he decided to sell German sausages known as 'dachshund sausages.' When the kitchen staff ran out of the waxed paper on which the sausages were traditionally served, Stevens had one of his employees purchase some buns to hold the sausages instead. Reportedly, a cartoonist recording the event was unable to spell the word “dachshund” and wrote “hot dog” instead.

**The Above Description about Harry M. Stevens will be included with the platter**

Size:
15 1/4 inches in length
10 1/4 inches in width
Backstamp is hard to read (please see photos)
This type of sports memorabilia is rare and hard to find

This platter is in Very Good condition. It has no chips, cracks or crazing. There are very many utensil marks from being used in a restaurant. The platter is still lovely and as restaurant ware its great for everyday use.