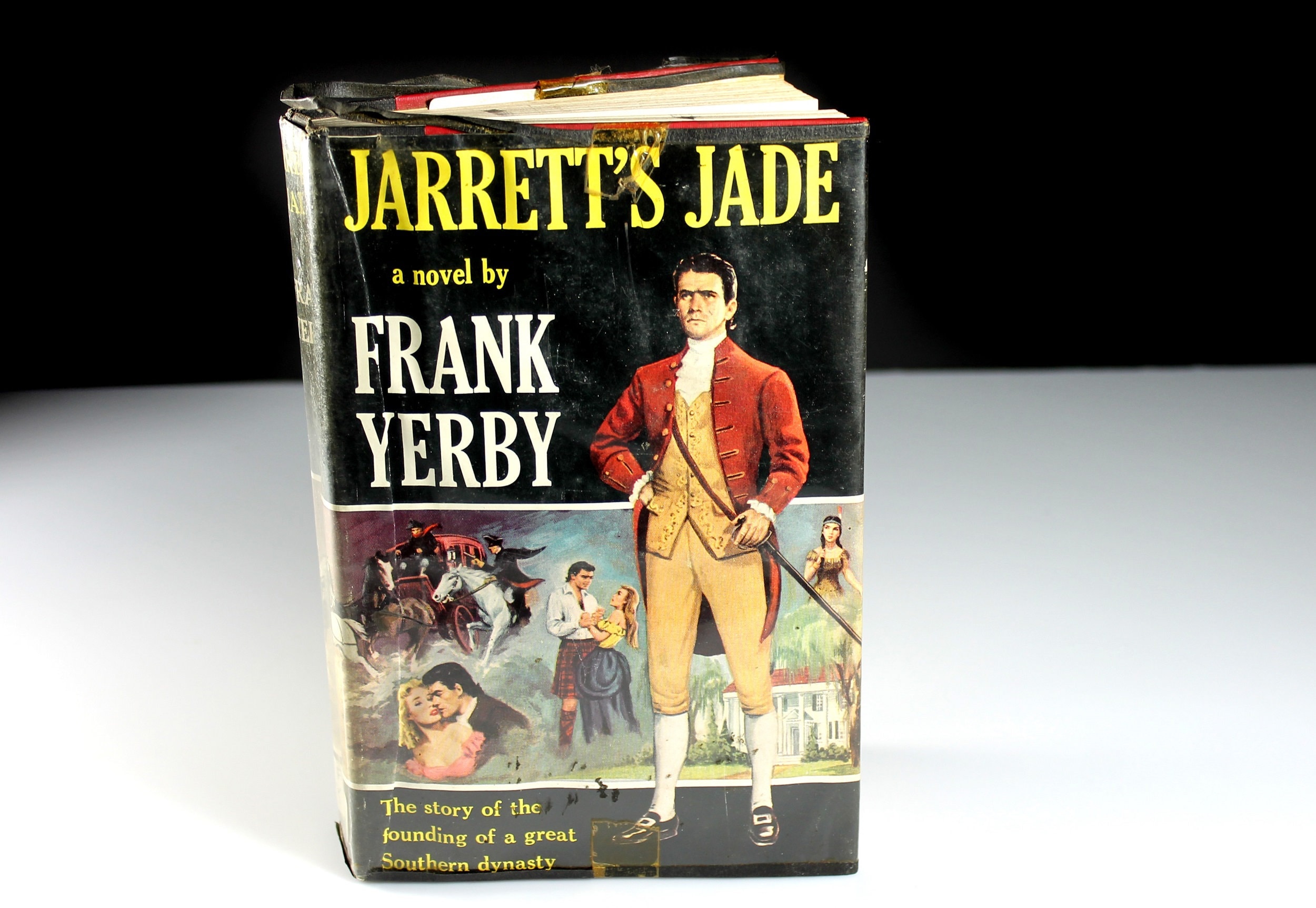 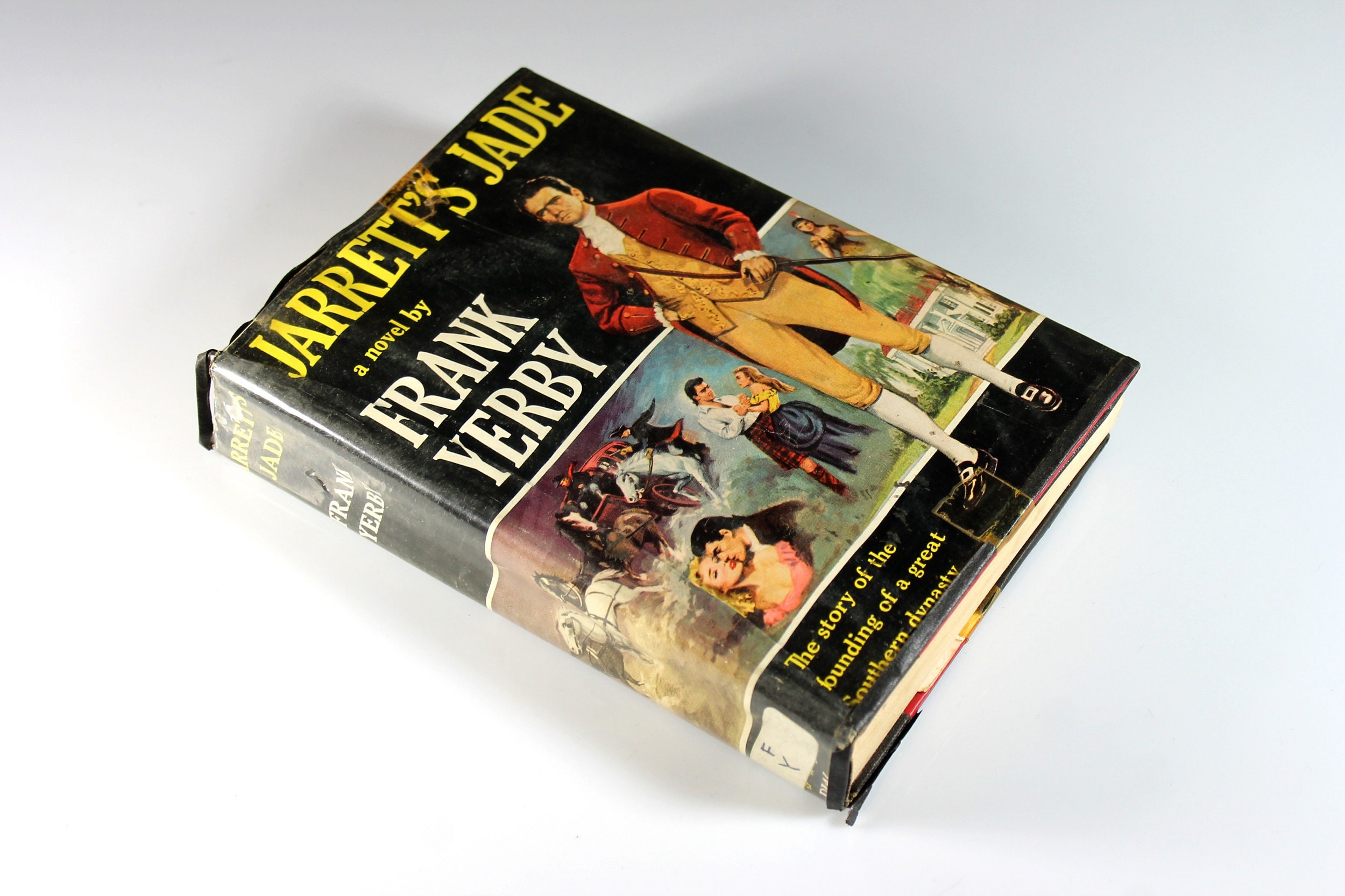 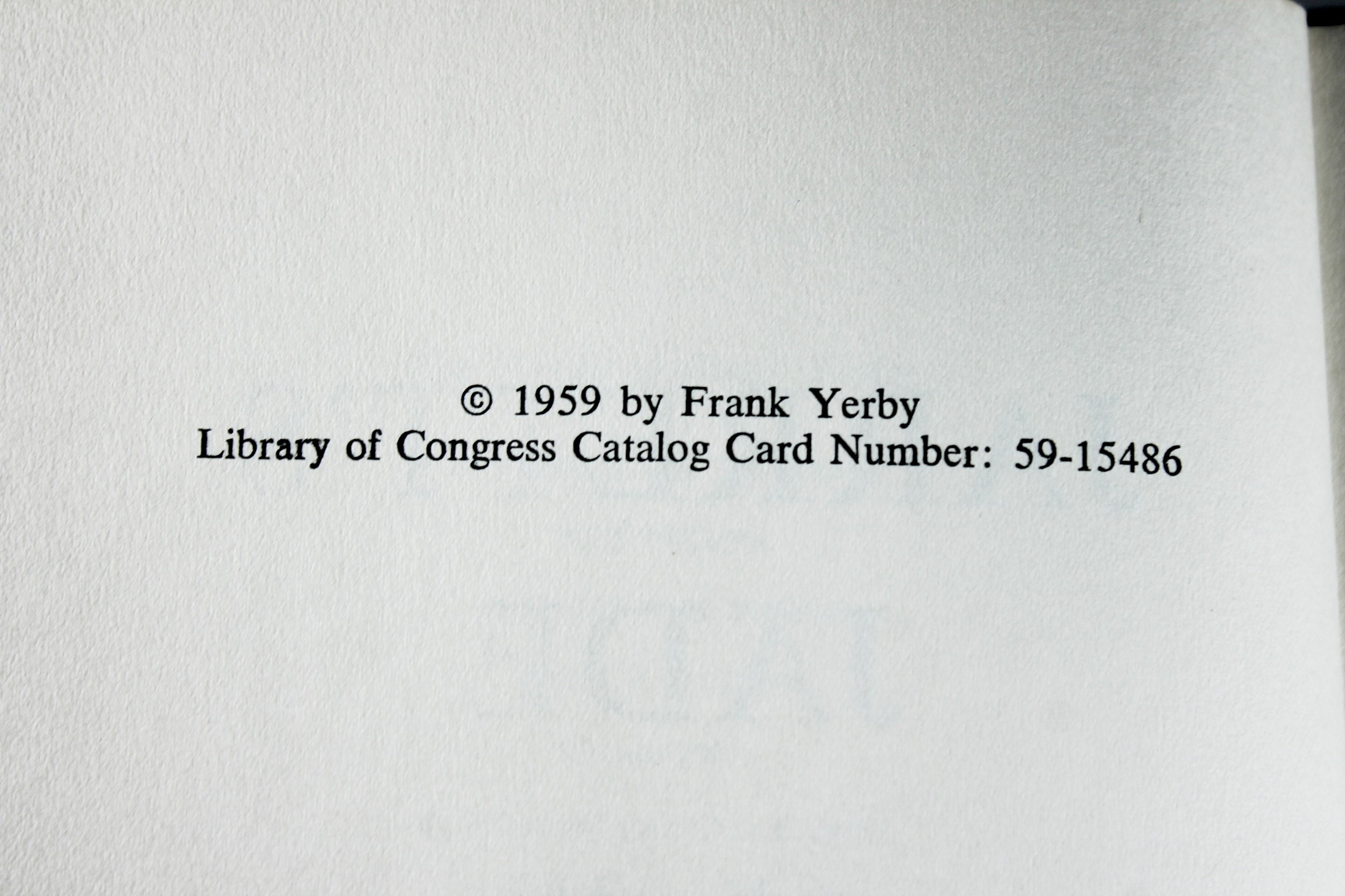 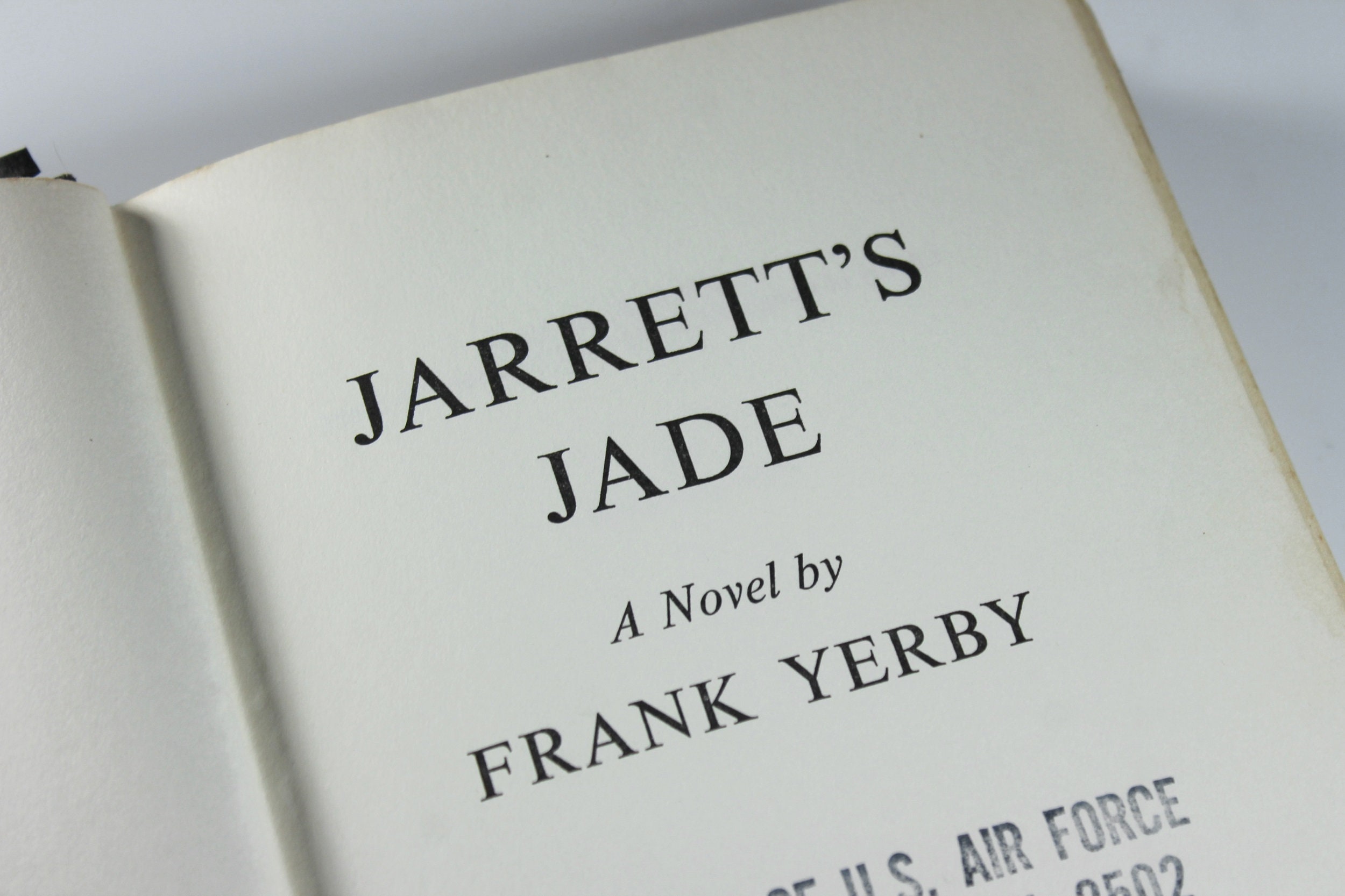 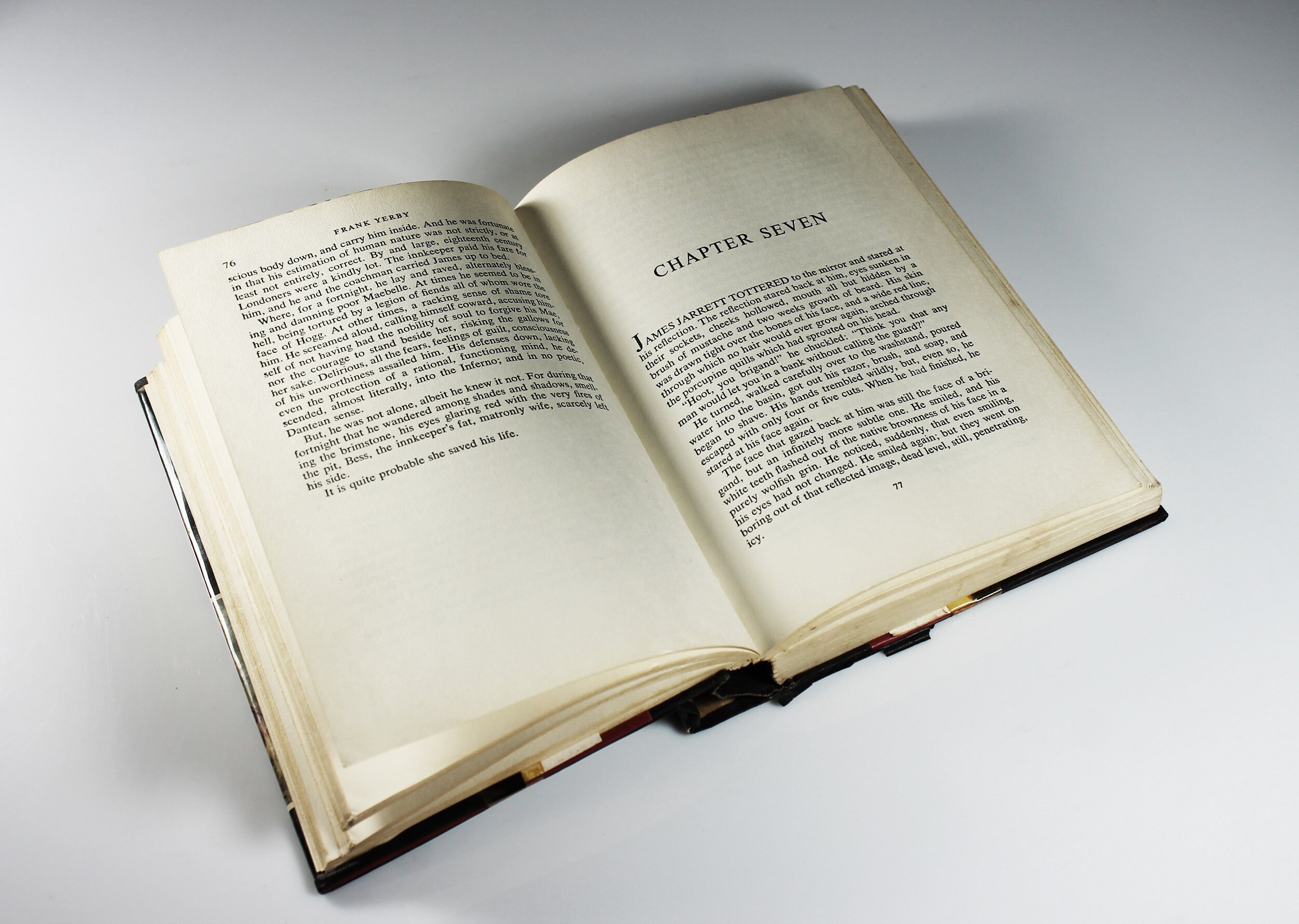 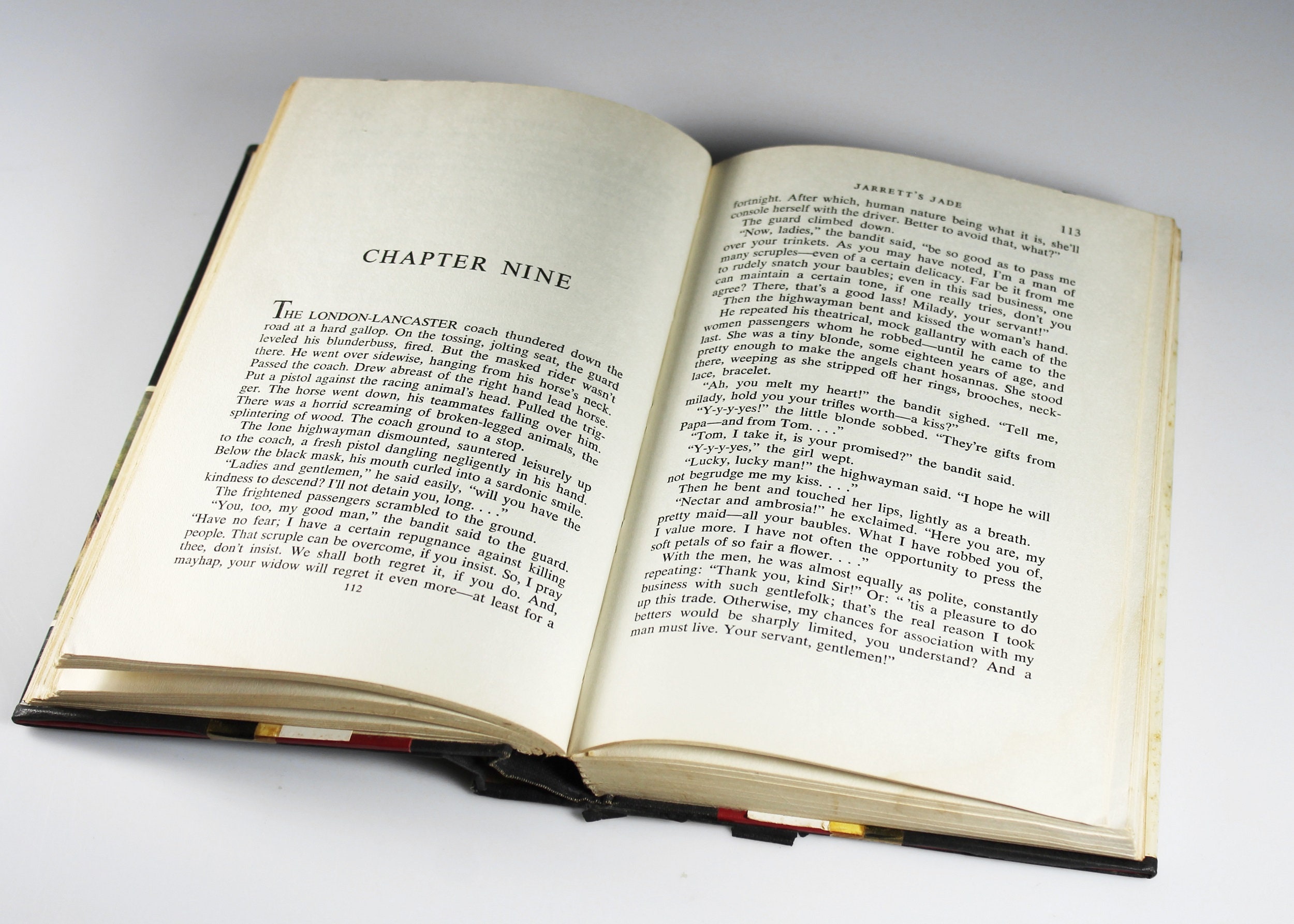 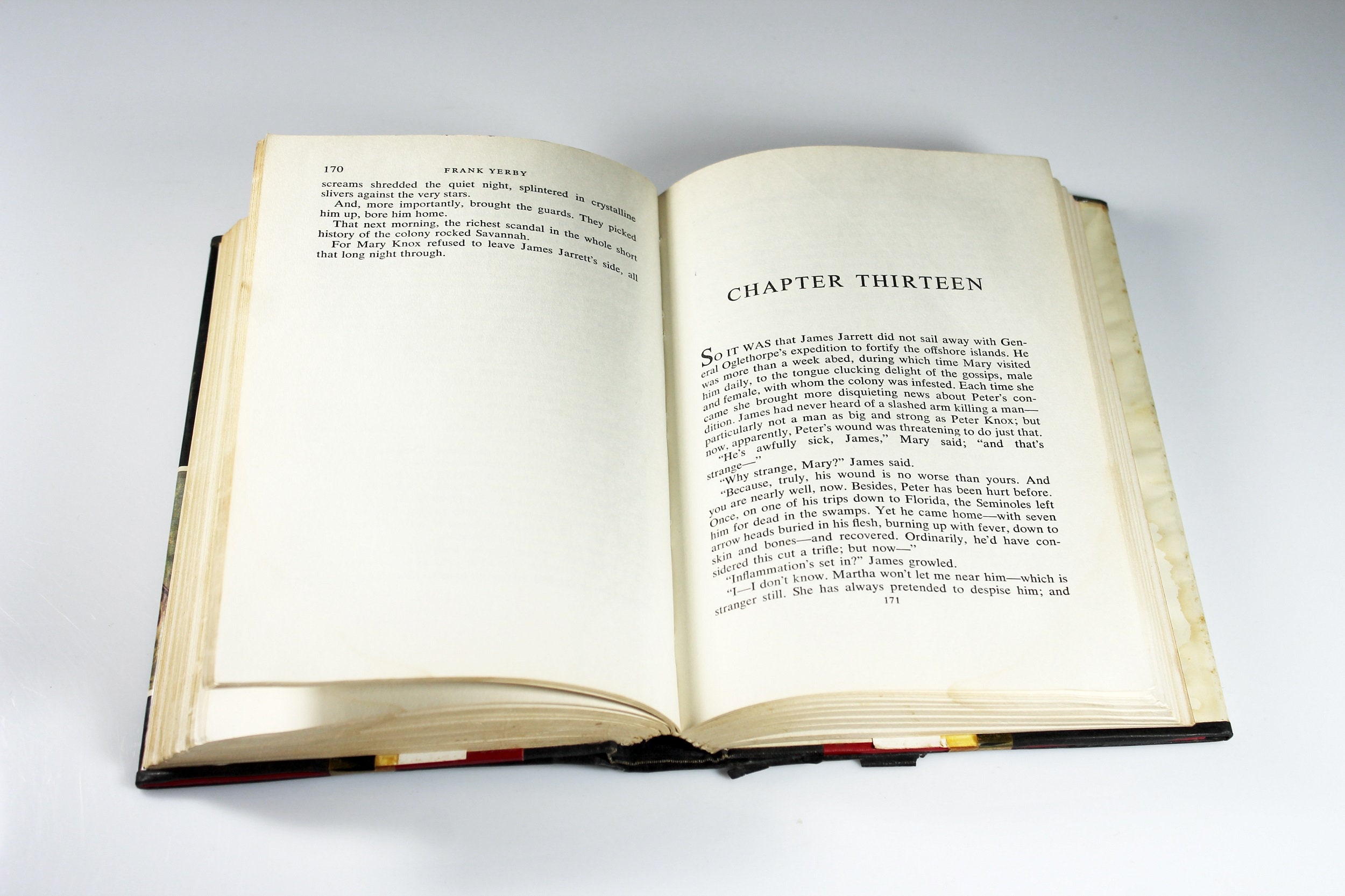 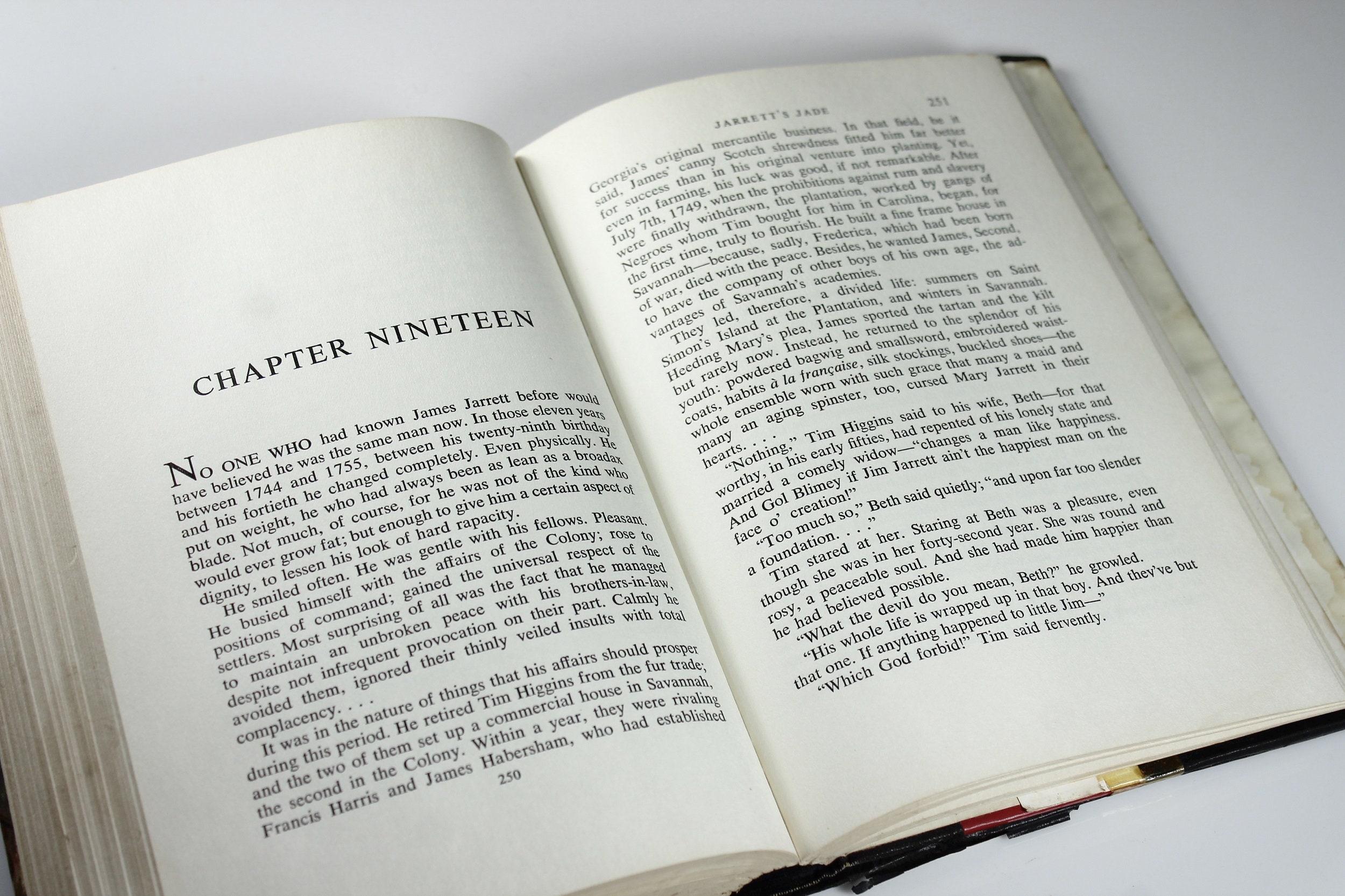 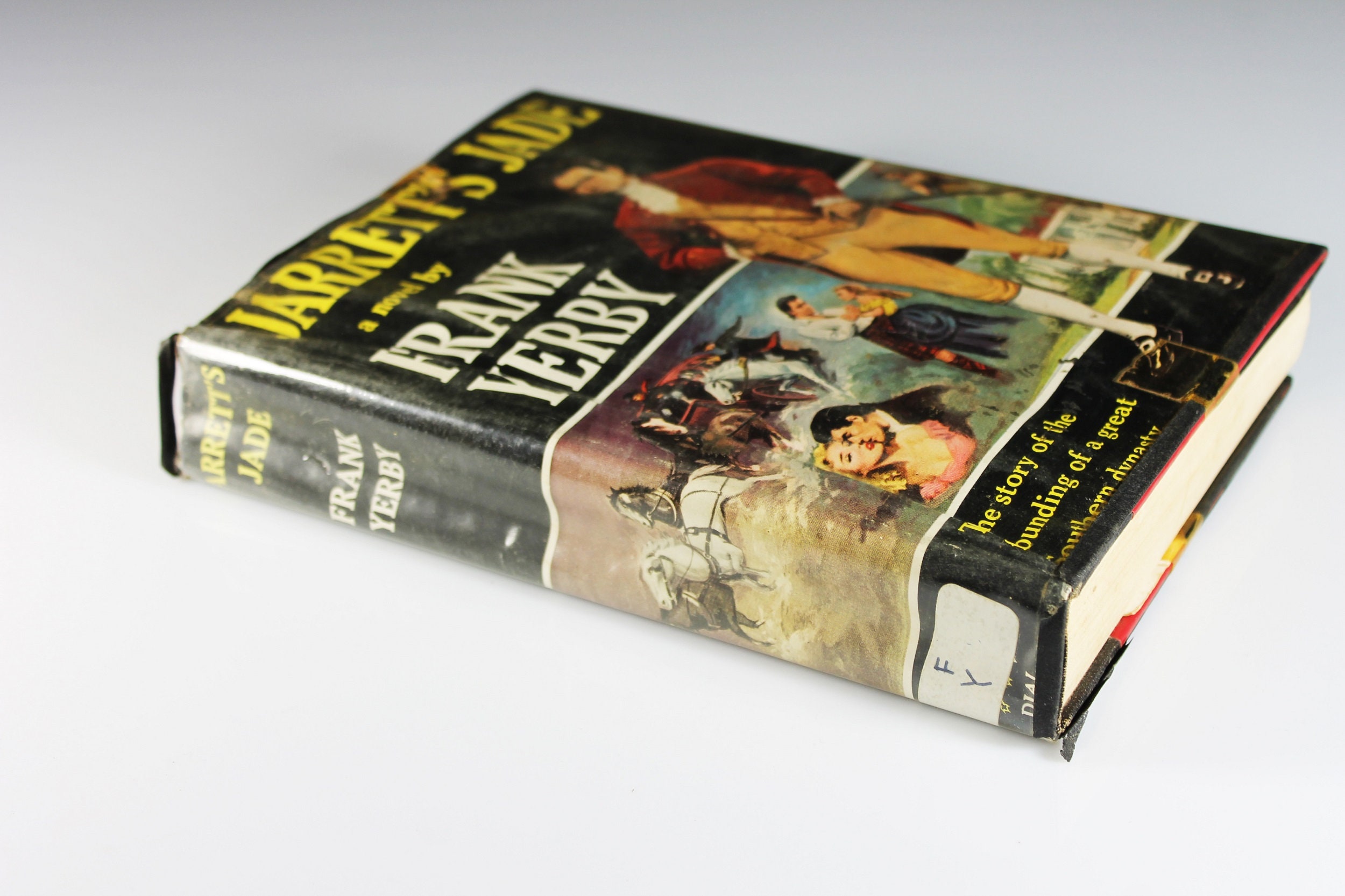 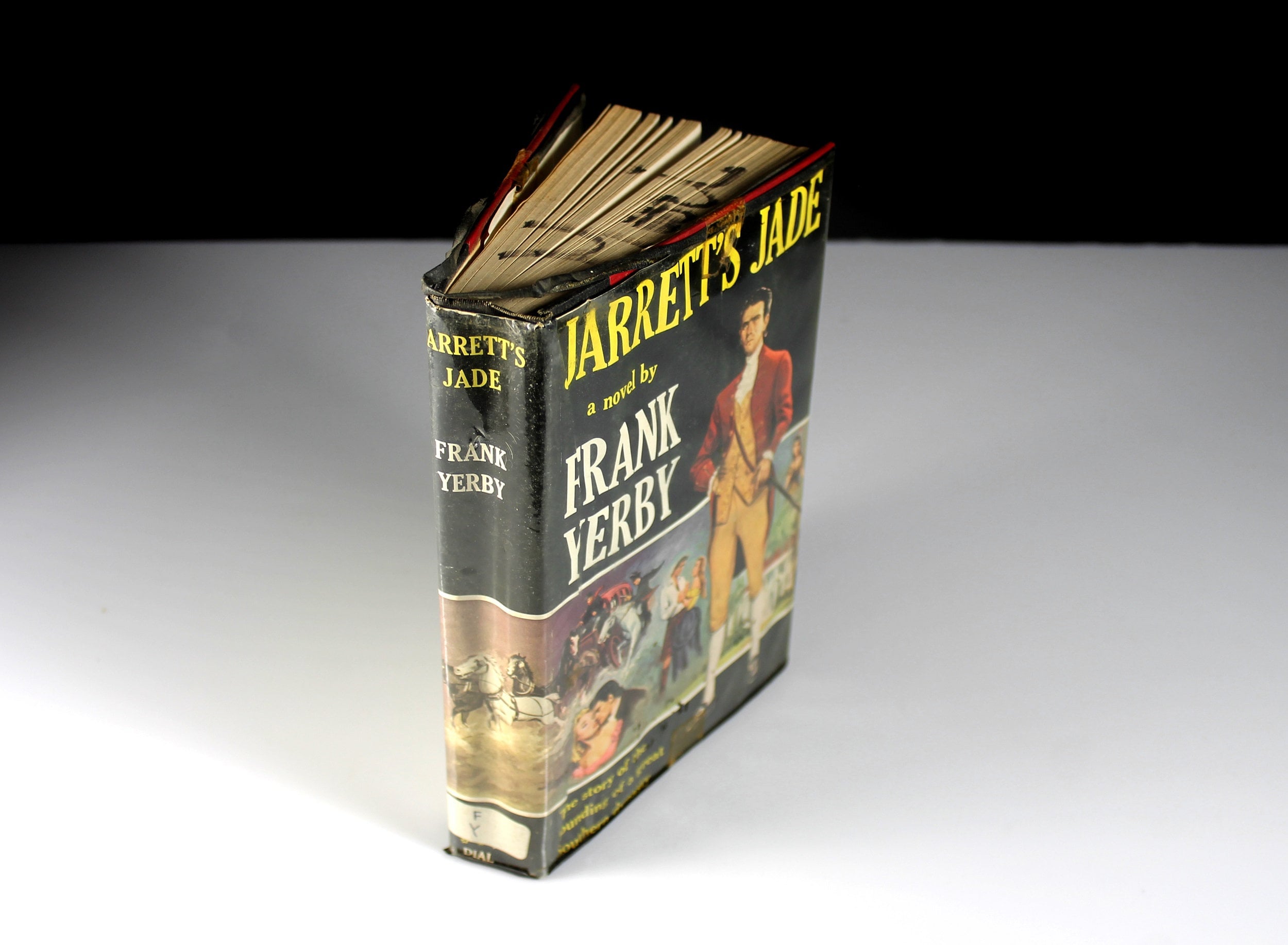 A hardcover book by Frank Yerby and is entitled Jarrett's Jade. This is a 1959 Ex-Library book and a First Edition with its original dust cover in a clear plastic book jacket cover.

Lord James Jarrett, Marquis of Argyll arrived in Savannah in 1736, clad in kilt and tartan, tall, broad-shouldered and lean as a broadax, with a face less villainous than exciting. James Jarrett looked like what he was - a Highland aristocrat - the Laird of Clan Jarrett. Part devil, part angel, he came to Georgia to take the wife who would help him found a New World Clan Jarrett, a great southern dynasty. He knew what he wanted and he fought for it with a skill and daring and courage that was almost madness. Many women loved James Jarrett. There was Maebelle, a pretty Scottish girl of seventeen whose love led her to disgrace. There was Sue Merrick, an English aristocrat, who thought James a monster, who hated and loathed him - and who was powerless for her love for him. And in Savannah, there was Mary Knox, fragile and fair, whose sweet face was like a cry in the bitter blackness of James' heart and whose brutish brothers swore eternal revenge on James. And there was Simone Duclos, whom James bought at a slave auction, who had the trimmed down fineness of a thoroughbred and suffered despair and social ostracism to be near him. Two sons bore James Jarrett's proud name, but it was the youngest, Jarl, whose life was influenced by the dark secrets hidden behind the silent facades of James Jarrett's Georgian mansion. It was Jarl who, as 1776 and the War for Independence drew near, at last learned to hate his own father. Once again, in Jarrett's Jade, Frank Yerby brings to life the color and atmosphere of the American South in the glorious days of its beginning. This is a story charged with blood and fire, with white hot passions and animosities, with strife and warfare and the clash of army against army, family against family, and father against son.

Frank Garvin Yerby (1916 – 1991) was an American writer, best known for his 1946 historical novel The Foxes of Harrow. Yerby was originally noted for writing romance novels set in the Antebellum South. In mid-century he embarked on a series of best-selling novels ranging from the Athens of Pericles to Europe in the Dark Ages. Yerby took considerable pains in research, and often footnoted his historical novels. In all he wrote 33 novels.

This book is in good condition. The book has no rips or tears. The binding is a bit loose but completely intact. The book has a light musty smell and the pages are foxed (yellowed) with age. There is a signature in black across the top of the pages. Dust cover is covered in plastic. There are the usual library markings in the book and the card holder with card on the back flyleaf.